I’m Scottish! Yes, really. As Scottish as any American who doesn't speak Scottish Gaelic doesn't have any close family in Scotland, and can't tell you where the Hibredesis.

My mother’s family can trace its roots back to the coasts of Scotland and France. According to my mother, my great-grandfather Francis McLaren, from whom I received my middle name, was a bag-pipe playing Scot who wore a kilt. I guess it’s no coincidence that my mother’s family settled on the hilly areas of the Grenadines. A 23andme.com DNA test shows that I am 43.9% Western European — mostly British and French. Yes, my family tree twists and turns in directions that my physical appearance won’t reveal.

While my grandfather’s family is mostly French, my grandmother’s family is Scottish with a bit of “native” American. I feel that when US Americans think about the phrase Native American, they think only of North America but I'm more inclusive here. My mother’s grandmother was a native of Venezuelan. My great grandfather married her and begat ( I’m getting all biblical ) a daughter who married my grandfather and they begat my mother who married my mostly African father ( how has a bit of Dutch ) and begat me.

But this blog post isn’t about genealogy. It’s about breakfast; specifically full Scottish breakfast. While researching my ancestry, I learned much about Scotland especially Scottish breakfast. I spent a bit of time with my maternal grandparents when I was a child. My grandmother always insisted on eating a hearty breakfast. Perhaps because of her heritage. For my grandmother breakfast was fried fish, fried “,fungi”, fresh-baked bread with a slathering of salted butter, and a large enamel mug of hot cocoa1 or café au lait2.

Sometimes we had fried black pudding. What’s black pudding? The ingredients sound revolting: pigs’ blood, fat, oats, barley, and spices, all stuffed in a length of intestine. The island version will have rice instead of oats and barley. I loved black pudding growing up. Sweet, crunchy and fried. Oh yeah!

Anyway, a few years ago I felt nostalgic for the homeland and started to look for places that served black pudding. My search led me to The Blue Rooster in Cranbury where I’ve had a Father’s Day breakfast every year for the last three years. The Blue Rooster has a Full Irish Breakfast on the menu. Full is a word used to convey completeness but a Full Irish Breakfast also tends to make the diner feel full. The Rooster’s version is black pudding, white pudding, sausage ( banger in the vernacular of the UK ), tomato, baked beans, ham, toast, sautéed mushrooms, and two eggs over easy. Wow! 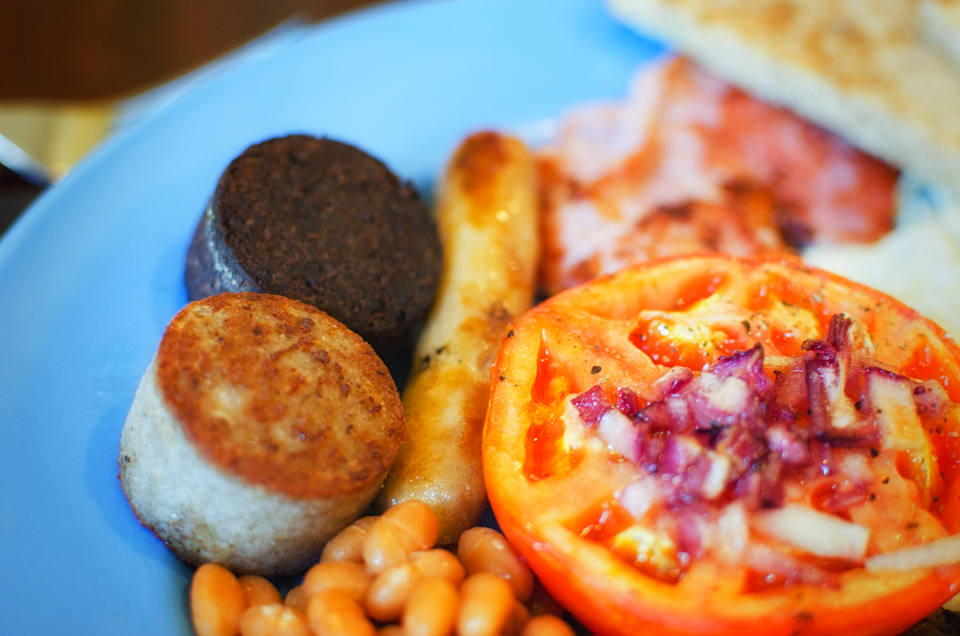 It’s a hearty breakfast but since I limit myself to the once a year trip for Father’s Day I’m not worried. Much!

According to my research a Full Scottish Breakfast is:

For lunch today3 I added some elements of a full Scottish breakfast (scones and oatmeal) to the Rooster’s Full Irish Breakfast. I didn’t have access to a tattie so I settled for a scone.

According to my research porridge is different that the oatmeal eaten in the USA:

Scottish oatmeal is smoother than your typical Quaker Oats. Start with a pat of butter and a splash of milk, then toss in some golden currants (like raisins, but not) a generous spoonful of light brown Demerara sugar, and you’re ready to begin the day the way Scots have for centuries.

I settled for a tiny cup of Holly’s Whole Grain Oatmeal from the menu. When I explained to our server what I was trying to do she served my oatmeal with brown sugar and blueberries on the side. I added a scone and was ready for my adventure.

I took a swig from my mug of French Press coffee and dug in. Slowly but surely I ate everything on my plate; just like my grandmother had taught me. As I said before, by “full” the Scots mean “complete,” but full is what I felt when you finished the last bite of that scone. After I completed the meal I was sure that I no longer wanted dinner. I wanted two Lipitor and a nap. I skipped the Lipitor4 but around 2PM I dozed off watching the kids play on the Nintendo. I can't wait for next Father's Day.