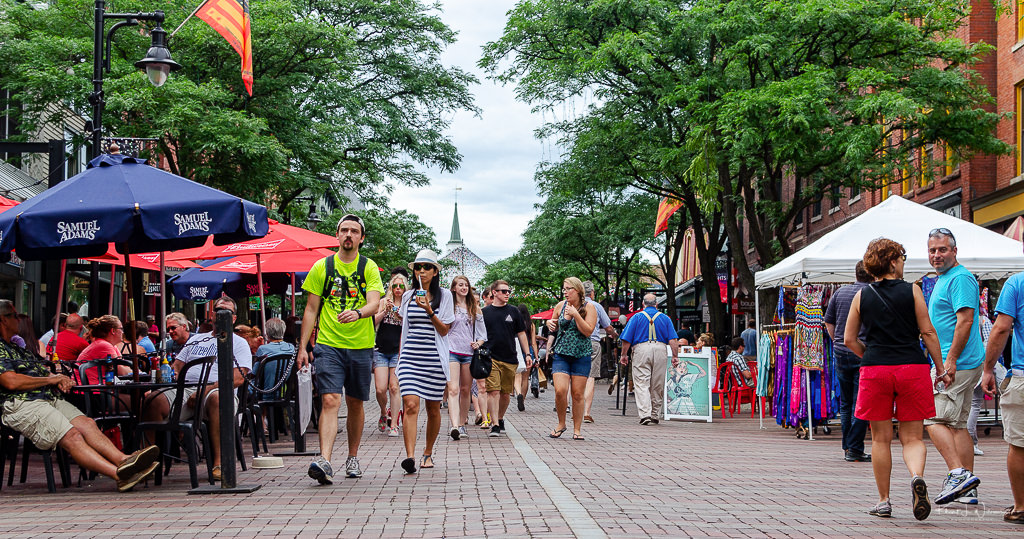 This summer we drove to Vermont to drop my daughter off for a 10-day summer wilderness retreat at the Sky Meadow Retreat in Greensboro. My wife thought it would be an excellent way for her to learn relaxation and stress reduction techniques while taking a break from technology. No bacon, no wi-fi, and no reading. Those three things would be a challenge for her.

Sky Meadow is located at the northern end of Vermont, not far from the Canadian border. The iPhone mapping app indicated that it would take about seven hours to drive from New Jersey. Kiran had to be at the retreat by 2 PM on Saturday, and we did not want to start our journey at 7 AM. We decided it was best to drive up the day before and stay overnight in a hotel, leaving on our return trip soon after dropping her off.

Kiran's drop off time was the next day in the afternoon. We spent the evening of the first day and the morning of the next day sightseeing in the Church Street Marketplace in Burlington. I had my Nikon D5100 and AF-S Nikkor 35 mm f/1.8 with me on the trip, so the 52.5mm full-frame field of view was just the right lens for some safe street photography.

That night we drove into Burlington and parked near the Church Street Marketplace. On the way into Burlington, we stopped at a beer retailer in Winooski and bought some six-packs to take back in the cooler we brought with us. We bought Sip of Sunshine by Lawson's Finest Liquids, Heady Topper, and Switchback Ale by Switchback Brewing Company.

Some time ago, a long section of Church Street was closed to vehicular traffic and converted to an outdoor shopping mall. Restaurants, bookstores, and shoppes lined both sides of the street. We arrived too early for our reservation time, so we walked along the centre of Church Street, observing people walking around or dining outdoors.

We had dinner at Pascolo Ristorante. Bhavana and I sampled some of the Vermont ales from the menu including Fiddlehead IPA and The Alchemist ‘Heady Topper’. I finally got to try Heady Topper! Heady was good, but I think the hype over this ale affected my enjoyment. Many of my craft ale drinking friends had put Heady Topper on a pedestal, and I may have expected an earth-moving experience, but instead, my taste buds felt the experience was “meh”.

The Church Street Marketplace is within proximity to several other Vermont micro-breweries but alas we had time to visit only one that night. After dinner, we drove a few blocks away to Zero Gravity Craft Brewery on Pine Street. I don't remember where I had read it. Still, I wanted to visit Zero Gravity because I had read an online article about how they were making beer in a more traditional method that brewers used before hops became popular. Apparently, before the use of hops for preservation and flavouring and the imposition of German beer purity laws, beer was "seasoned" with a wide variety of herbs. I was excited to try the Zero Gravity Summer Gruit. Zero Gravity uses organic Sweet Gale, Yarrow, Stinging Nettles, and Mugwort from Hallow Herb Farm, as well as Labrador Tea. The gruit was slightly sweet but quite enjoyable. The experience expanded my knowledge of craft ale brewing methods.

Bhavana and I also sampled Conehead, C.S.A IPA, Bernie Weisse, Cote de Champlain and Little Wolf. I loved Cone Head. Bhavana and I think it's better than Heady Topper. Zero Gravity may be underrated. We had fun chatting with a couple visiting from Massachusetts who was originally from Hamilton, New Jersey. Talk about a small world. We bought a four-pack of Cone Head and a 750ml bottle of Cote de Champlain to take back with us to New Jersey.

Shaan and I were up early and I gave my teenage son a choice of the walkable options - McDonald's, Burger King or the Athens Diner. He was strongly in favour of the diner.

Kiran's drop off time was 3 PM, so we had the whole morning to explore. Shaan and I were up before Bhavna and Kiran. We went for a 30-minute walk around the area near the hotel, worked up an appetite, and then walked our way across the street from the hotel to the Athens Diner which, according to the Four Square and Yelp reviews, seemed to be very popular. The Athens Diner in Colchester is a retro mom and pop diner featuring standard diner fare with a Greek twist. But that could describe any Greek diner in New Jersey. The Athens Diner is a real diner car, which the owner moved from its original location in New York.

The diner has all the favourite diner breakfast classics, but also gyros and a few Greek-inspired breakfast items. The staff were friendly and welcoming. Our order was taken quickly and while we waited for the food Shaan was served chocolate milk and I had a coffee. Why does diner coffee always taste so good? Our breakfast of eggs, bacon, and pancakes was delicious and filling.

I wanted to use the trip as a photographic opportunity, however, we had only one day in Burlington, so I did some location scouting via the Internet. I also knew that my time was limited to the mid-morning to early afternoon. After breakfast, we drove to the Lake Champlain Waterfront and walked around enjoying the view. Bhavana was excited to see the sailboats, as well as the rowing crew.

We had lunch at Splash At the Boathouse, a restaurant on Lake Champlain Waterfront with open-air dining and a view of Lake Champlain.

After lunch, it was time to take the long drive to the retreat. The drive was pleasant we saw a lot of the Vermont countryside, quite different from the city of Burlington. I wish I had time to stop for photography, but we had a schedule to keep.

It was a quick stop as we had to turn around and head home. I was also anxious to leave as quickly as possible because Greensboro is so remote that obtaining a strong cellular signal for the GPS was a challenge the whole drive. I wanted to go before it got dark. After signing some paperwork, we said hugged our daughter and headed back. 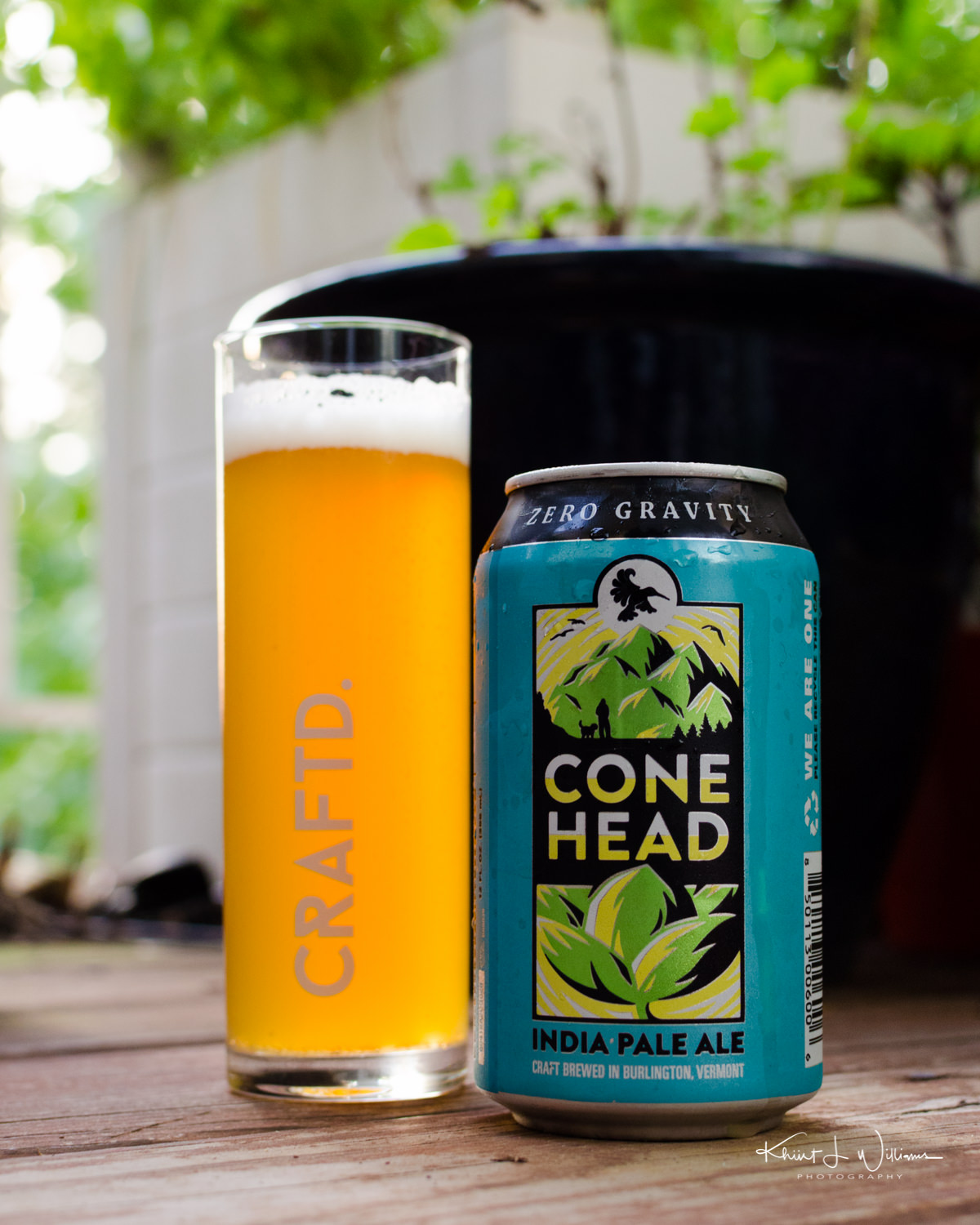 My wife and I were in Vermont last weekend dropping our daughter off to a summer retreat. The drive to Greensboro was almost 7 hours. We decided that doing the trip in one day would be too tiring so booked a room in Winooski and drove up the day before. Since check-in was at 3PM we took the opportunity to visit downtown, Burlington. But not before I dropped in at a Winooski beer retailer and picked up beer from local brewers including the famous Heady Topper. We were only allowed to purchase one four-pack.

We had dinner at Pascolo Ristorante in Burlington and then dropped in at Zero Gravity to try a flight. Why Zero Gravity? I wanted to try the Summer Gruit Ale which I found by looking at the nearby tab in Untappd. A long time ago before the discovery of hops and German beer purity laws, beer was made with an herbal mixture as a flavouring.

After sampling Cone Head, Little Wolf, C.S.A. IPA, Bernie Weisse and Choice Make Good -- we met a wonderful couple from New Hampshire who were originally from New Jersey --- I have to say I don't get the enthusiasm for Heady Topper.

Yes, Heady Topper is great. We enjoyed the can we had at Pascolo Ristorante. But from my perspective, Zero Gravity Cone Head is better. And it also more available. No need to line up outside some package store waiting in the heat for the “hope” of buying a single case.

We bought a six pack of Cone Head to bring back with us to New Jersey. We would have bought more but we did not have any more space in the cooler.

So there I said it. I think Heady Topper is all hype.