What's the focus of the photograph? 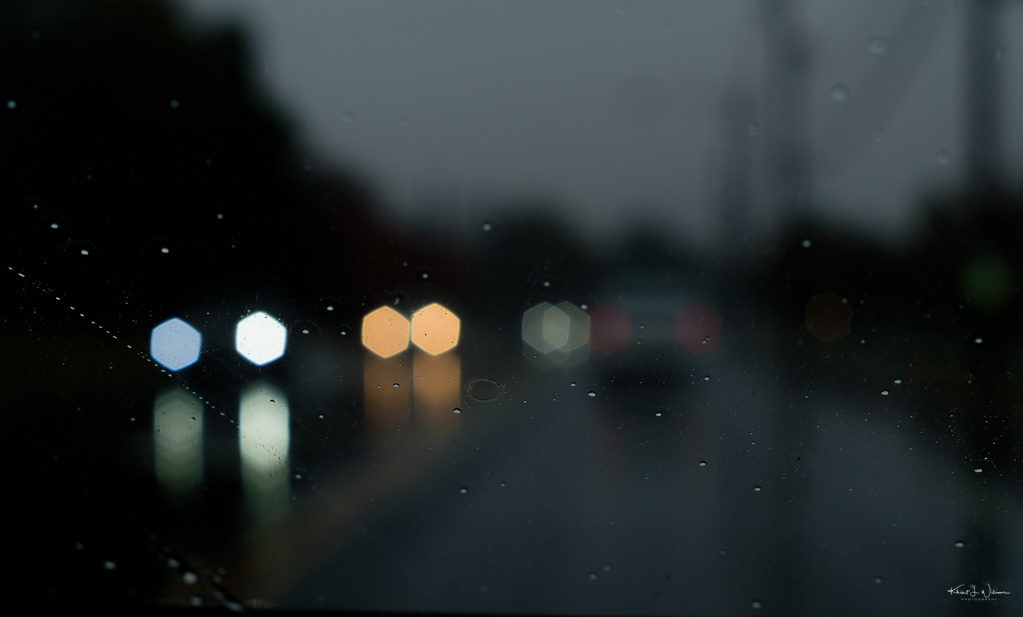 Without a central theme or subject, a photograph can lack cohesion. Photographers have many ways they can bring the viewer into an image, to highlight the thing or things the photographer wants them to notice. As Patti mentioned in her post, one way is with leading lines. None of the image below use leading lines. Another way is with selective focus, using depth of field to narrow the focus, blur the background and to bring the viewer to the subject. But what if the out of focus element is the focus of the image? What if you use a 35mm film camera manual focus lens and deliberately put effort into creating out of focus images? What is the subject of the image then?

Sometimes, you can bring attention to the subjects of an image by removing anything from the frame that detracts or does not add to the story. The mother is playing in the leaves with her daughters on a sunny fall day in October. They were having so much fun. I cropped in from the sides of the original images to narrow the focus of the viewer.

The woman stepped over a short barricade to sit in the leaves under a line of trees. She held up a singular leaf under her chin while her friend took her photograph. They were oblivious to my camera. I cropped in from the top and bottom.

I've learned that some photographers shoot in black and white because it removes the distractions of colour. I learned much of my black and white photograph from renowned Argentinian photographer, educator and documentary filmmaker Ossian Lindholm. Ossian has led groups of photographers and naturalists on photographic journeys throughout his native Argentina. Ossian is a teacher who encourages his students to convey what they see before, even picking up the camera.

Last fall, in Princeton, Ossian taught a course in Black & White Photography and Creative use of Light in Landscape Photography. Part of his course included a field trip around the Princeton University campus where these images were capture. While walking around, I stumbled upon an engagement shoot. This photographer was furious, trying to chase the light as is travelled between the trees. His subjects became my subjects. I respectfully stayed out of his way.

Patti wrote in her that using contrast & focusing on the eyes was another way to bring focus to a subject. In this photograph, the walls of the courtyard building have created a reverse software box, pushing strong shadows to box in the subjects. A strong beam of light breaks the shadow to reveal the loving couple at the centre.

The contrast between the darker background and the front light on the white of the flowers helps to focus the eye viewer on the details in the flowers. The contrast in effect frames the subject with darkness.

The seemingly endless archways to be found on the Princeton University campus, provide frames for the street portraits of campus walkers. I even got a shot of Ossian Lindholm framed in one of the arches.

Submitted for the 100DaysToOffload project and Lens-Artist Photo Challenge. 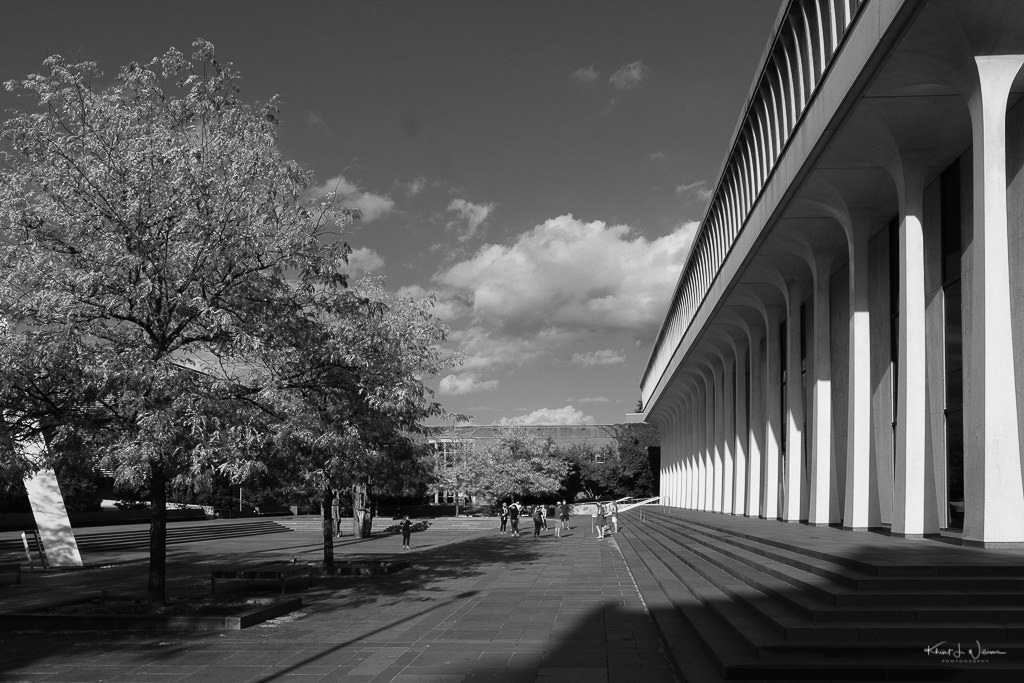 In 1930, Princeton University established the School of Public and International Affairs, which was originally meant to serve as an interdisciplinary program for undergraduate students in Princeton's liberal arts college. In 1948, the School added a graduate professional program and was renamed to honor Woodrow Wilson, who was the 13th president of the University, governor of New Jersey and the 28th president of the United States.
...
In 2015, student protesters forced Princeton to reconsider having the School named after Wilson due to his racist views, of which they disapproved. The Wilson Legacy Review Committee ultimately decided to keep his name attached to the School, noting that, like many other notable figures from American history, Wilson had a "complex legacy of both positive and negative repercussions".

On June 26, 2020, following the eruption of George Floyd protests and the resurgence of the Black Lives Matter movement, the Princeton University Board of Trustees decided to rename the Woodrow Wilson School the "Princeton School of Public and International Affairs", citing Wilson's "racist thinking and policies [that] make him an inappropriate namesake for a school or college whose scholars, students, and alumni must stand firmly against racism in all its forms." It was also announced that Wilson College, the first of Princeton's six undergraduate residential colleges, will be renamed First College. Woodrow Wilson opposed admitting African-American students to Princeton and introduced racial segregation into the United States federal civil service as President.

I wanted to capture the intensity of the contrast between the white of the columns and the shadows but the overhead clouds didn't care what I wanted, obscuring much of the light. I also think I arrived an hour too late. 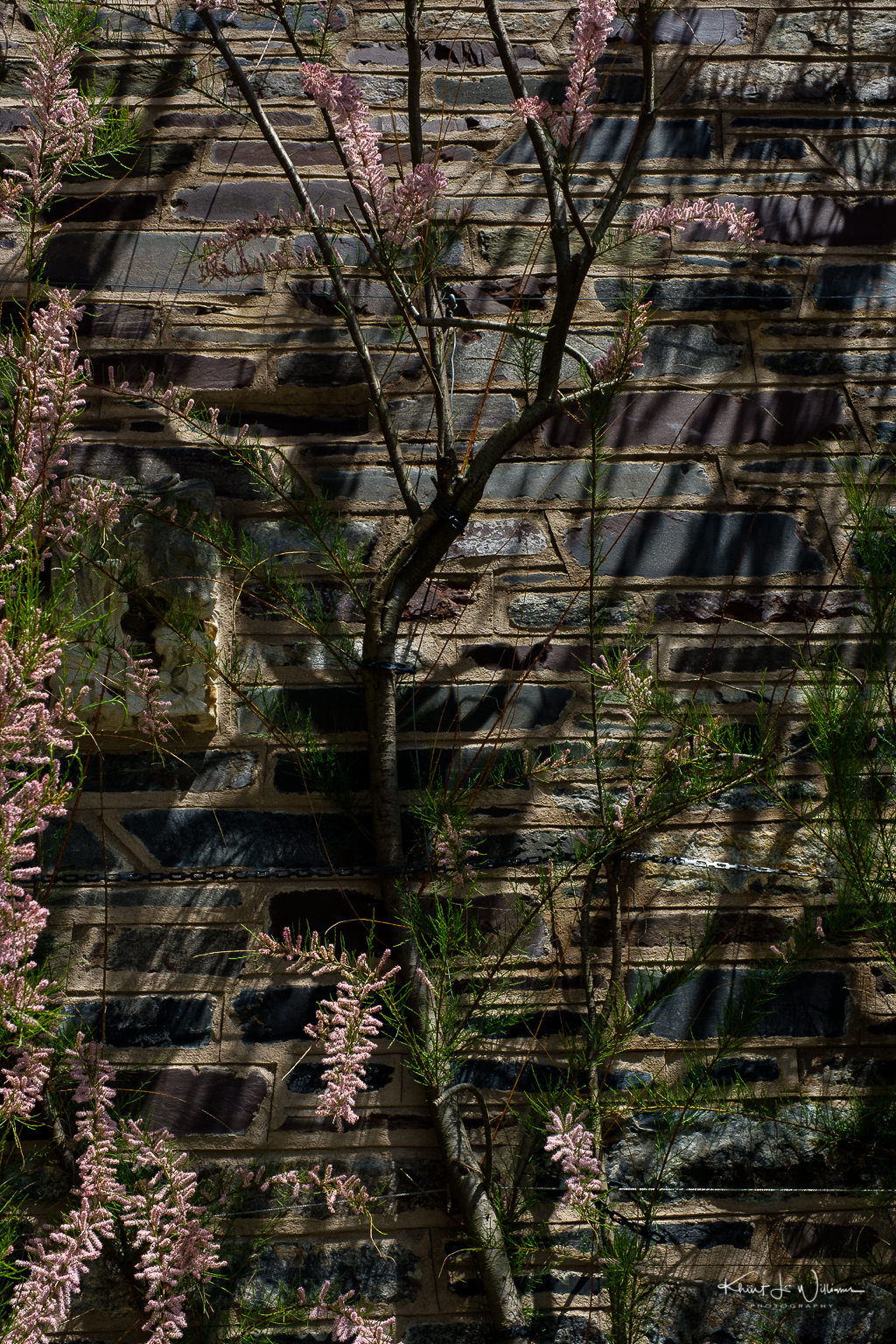 This afternoon Bhavna and I went to the Princeton University campus. The intent was to change up our routine and walk the campus for exercise. Of course, I brought my camera. We near the intersection of University Place and College Road donned our masks, it's all the fashion these days and sauntered toward Henry Hall and Laughlin Hall. I photographed some of the trees and buildings in the mottled light of the afternoon sun. We found our way to the newly named Beatrix Ferrand Courtyard. My camera found windows and door and trees and flowers to photograph as we made our way around toward the steps up to Blair Hall. We encountered a few people, many of whom wore masks but others who did not. We had enough rooms to keep almost three metres from people.

We strolled toward Easy Pyne Hall where I took more photographs. I remembered the gardens at Prospect House & Garden and knowing that Bhavna had never been there, I suggested we make our way over. We spent quite a bit of time walking between the trees, flowers and plants. Bhavna complained that I had never told her about the garden. As I expected, the garden had more people than the other parts of campus but not enough to be a problem. The campus is closed so empty of students.

After Prospect House & Garden, I explored more of the campus with Bhavna, many areas neither of us had visited. More photographs. I was hungry, and Bhavna had to use the bathroom so we cut back westbound toward where we parked. I took more photos along the way, including one of a red fox. At first, I thought it was a statue but then the fox moved its head and twitched its ears. I think this fox is the same one that has been spotted near the Dinky Station. We stared at each other for about a minute before the scrawny looking fox ran off.

As I sit here picking the keeper, I realised that I didn’t like any of them. Perhaps I am just creativity exhausted or just exhausted. Of the 250 images I captured, I have deleted all but seven.