My townhouse community, Montgomery Hills, lies on the southern border of the Montgomery Township and Somerset County, fenced in by the woods on the northeast side of Princeton’s Autumn Hill Preserve and the the nearby borough of Rocky Hill, 2.9 km away, at the foot of the Rocky Hill Ridge and across the waters of the Millstone River, along the D&R Canal Trail.


I’ve photographed many of the historic homes and buildings in Rocky Hill over the last 18 years, but the challenge keyword is “hill”, but I wanted to capture images for the challenge, so I started first with Rocky Hill.
I can’t say much about the post office. All my mail goes through the post office in Carnegie Center which serves several areas that fall under the “Princeton“ zip codes.

Built-in 1745, the Rocky Hill Inn is a historic colonial inn that by the 1800s had become a “fashionable summer excursion stop-off for city folks,” but which today is a gastropub with multiple rooms, that serves delicious American pub-style burgers and craft ales.


From Rocky Hill, I drove 7km west back into Skillman and over to Burnt Hill Road, passing Cherry Hill Road on the way. The roads in Montgomery Township are narrow one-lane roads, the type you might find in a small farming town, steep embankments and ditches in many areas with no shoulder and no sidewalks. For the images on Burnt Hill Road, I parked in a clearing on Burnt Hill Road just near a hedgerow of wildflowers across the road from an abandoned farm bridge.
From Burnt Hill Road, I drove over to Spring Hill Road but didn’t find anything interesting to photograph. The road, which winds its way up into the trees to East Amwell Township, is a fun drive in the right car. It was while enjoying the ride that I realised that photographing the hills around the area would be challenging. There is no open hilltop to see the valley below and no open field below from where I can photograph the hills.


From Spring Hill Road, I drove to Hollow Road on the border with Hillsborough Township, which has a spot where I usually park to photograph The Rock Brook, but this time I drove up to the top of Servis Road hoping to see through the trees to the homes below. No such luck.


From Servis Road, I over the one-lane bridge that connects Hollow Road to Grand View Road, and down the hill to the bottom of Grand View. I grabbed some photos of the hills.
I was disappointed, decided to head home, and took Mountain View Road to Cherry Hill Road, to 518 to Orchard Hill Road and then back home.
The remainder of my images were captured from the driver side of the car, while I parked on the road, keep a close eye for traffic behind me. It was not ideal. 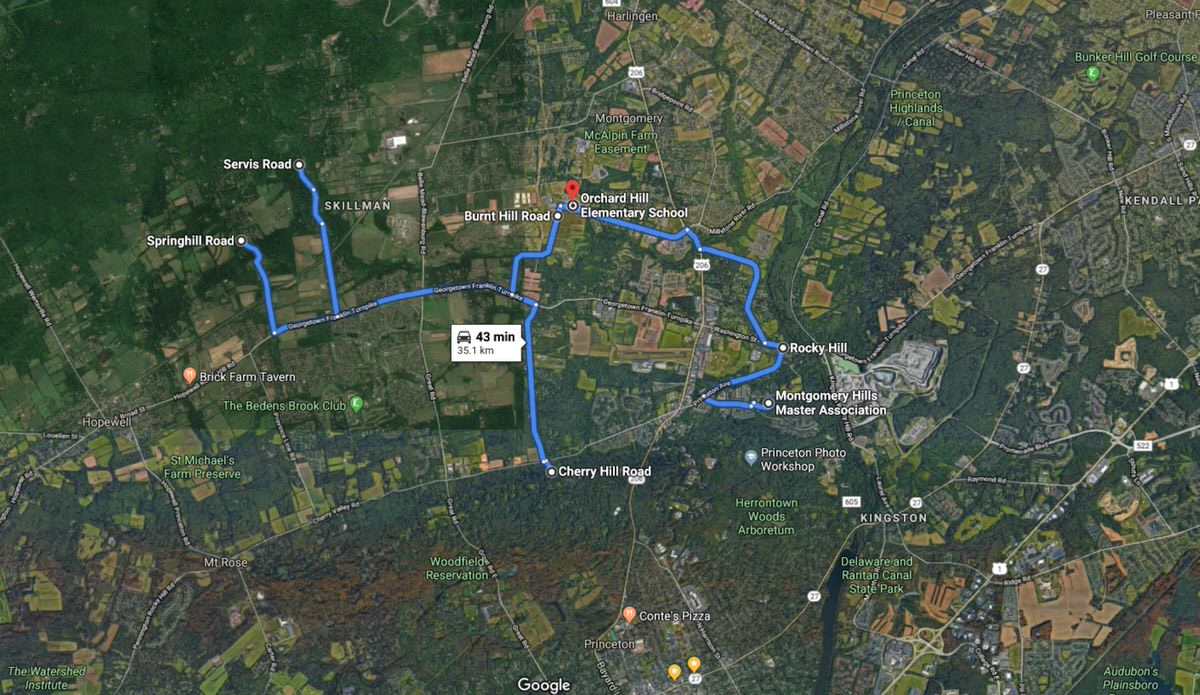 I was out capturing these images for about 90 minutes, with almost half of that time spent driving. My wife saw the disappointment on my face. She reminded me that my grandparents (Ollivierre) lived in a windy area at the top of Monkey Hill in Bequia, which is also the name of my consultancy. The image below is an old family image; not one from my catalogue.

The image below was taken by my mother of the family house on Dorsetshit Hill, near Kingstown, Saint Vincent, where I spent some of my youthful years and last years of high-school. It’s a partial view, from the wrap-around veranda, of the Kingstown harbour and the mountains. The word verandah, which I have always used in the British West Indies, but rarely hear in the USA< is from the from Hindi, but research indicates that the veranda itself originated in the British West Indies. I digress, but the verandah and British Colonial architecture is something that I hope to someday explore in detail with my camera.
Dorsetshire Hill Road is a long winding road that leads down to Kingstown from Dorsetshire Hill. At the foot of the road is an intersection of streets near a neighbourhood which has been historically referred to as “Sion Hill”. it’s where my dad grew up.

Blueberry Scones at Montgomery Friends Farmers’ Market
Kiran was upset that I didn’t visit the Montgomery Friends Farmers' Market last weekend. She loves the blueberry scones from Sweet Gourmet Bakery.
When the kids were younger, I would visit the farmers market almost every Saturday during the summer. The kids were in Tae Kwon Do, and the academy was in the same strip mall as the market. I would drop them off, shop, and chat with the local farmers and vendors. I would usually have a treat – hedgehog shaped bread or chocolate croissants – waiting for them at the end of a training session. These days I visit the farmers market by myself, everyone is still in bed when the market opens, but I still bring back treats.
I snagged a photo of this trio, relaxing to the sounds of the market band.

Yesterday I walked the Stonebrodge Trails with Bhavana. I’ve hiked or walked many of the trails in the area around Hopewell, Princeton, Hillsborough, and Montgomery including Van Horne Park Trail, Devil’s Half Acre, Autumn Hill Reserve,Institute Woods Trails, D&R Canal Park Trail, Griggstown Native Grassland Preserve Trail, St. Michaels Farm Preserve, etc.. Most of the trails in Montgomery Township were cleared and created by the Montgomery Friends of Open Space (MFOS) and D&R Greenway Land Trust.


Bhavna has had problems with a heel spur in her right foot. She’s been in pain for several weeks, but she wanted to get out of the house. I wanted to capture trail images for Frank’s weekly challenge. I remembered that Stonebridge Trails were mostly flat terrain that could be easy on her foot. She was hesitant but agreed to come with me. Neither one of us has walked the trail.
The trail wraps around the Stonebridge at Montgomery senior living community. We parked in the lot next to the Montgomery 1860’s house. We did not find the trailhead, which we later discovered was near the entrance to the 1860’s property but found a way onto the trail from behind the red barn.


We took a wrong turn at the fork in the trail, and I think ended up going south-east toward the D&R Canal toward Rocky Hill. The trail was muddy. We turned around and returned to the fork to go the other direction.


Some of the trails are part of a paved loop walkway which I think was built for Stonebridge. It’s early summer, and most of the spring wildflowers have since disappeared. However, I did find small islands of colour among the ocean of green.
Bhavna’s pain threshold was breached 30 minutes into the walk, so we took the abbreviate trail and headed back to the car.