My first roll for the challenge I used a roll of Kodachrome II while walking around the main street in Hightstown. But this time, I used a modified version of Ritchie's Fujifilm X-T30 Velvia Film Simulation Recipe. The Fujifilm X-T2 lacks the Color Chrome Effect setting that is available on the Fujifilm X-T3/X-T30. All of the images in this post are straight out of the camera. I love how the colours of the flowers and the fruit "pop." Next year, I'll make a note to use this recipe to shoot the early spring foliage and flowers with an additional mental not to use it this fall for foliage.

I captured some photographs at the Montgomery Farmers' Market then drove to Hollow Road, where I parked my car and walked down to the rock bed of the Rock Brook. As usual, the sound of the water rushing over the rocks and the wind blowing in the trees set me at ease. I was relaxed, noticing how green everything was and the lack of flowers. The occasional bright yellow butterfly floated by on the wind, too quick to photograph. I followed their flight through the trees into the distance.

The silence was broken by the sound of my iPhone, a call from my sister-in-law, inquiring how my wife was feeling after her surgery yesterday. We chatted and made plans to take my nephews out for a wander in the woods to my photographic hideouts. On my way home, I stopped in at Hobler Park. I captured some images of art installation and the yarrow flowers, the only thing in bloom at this point in the high heat and humidity of August.

Here are the keepers from my roll of 24. I used a 10 stop neutral density filter to capture the images of the water on the Rock Brook.

Kiran was upset that I didn't visit the Montgomery Friends Farmers' Market last weekend. She loves the blueberry scones from Sweet Gourmet Bakery.

When the kids were younger, I would visit the farmers market almost every Saturday during the summer. The kids were in Tae Kwon Do, and the academy was in the same strip mall as the market. I would drop them off, shop, and chat with the local farmers and vendors. I would usually have a treat - hedgehog shaped bread or chocolate croissants - waiting for them at the end of a training session. These days I visit the farmers market by myself, everyone is still in bed when the market opens, but I still bring back treats.

I snagged a photo of this trio, relaxing to the sounds of the market band. 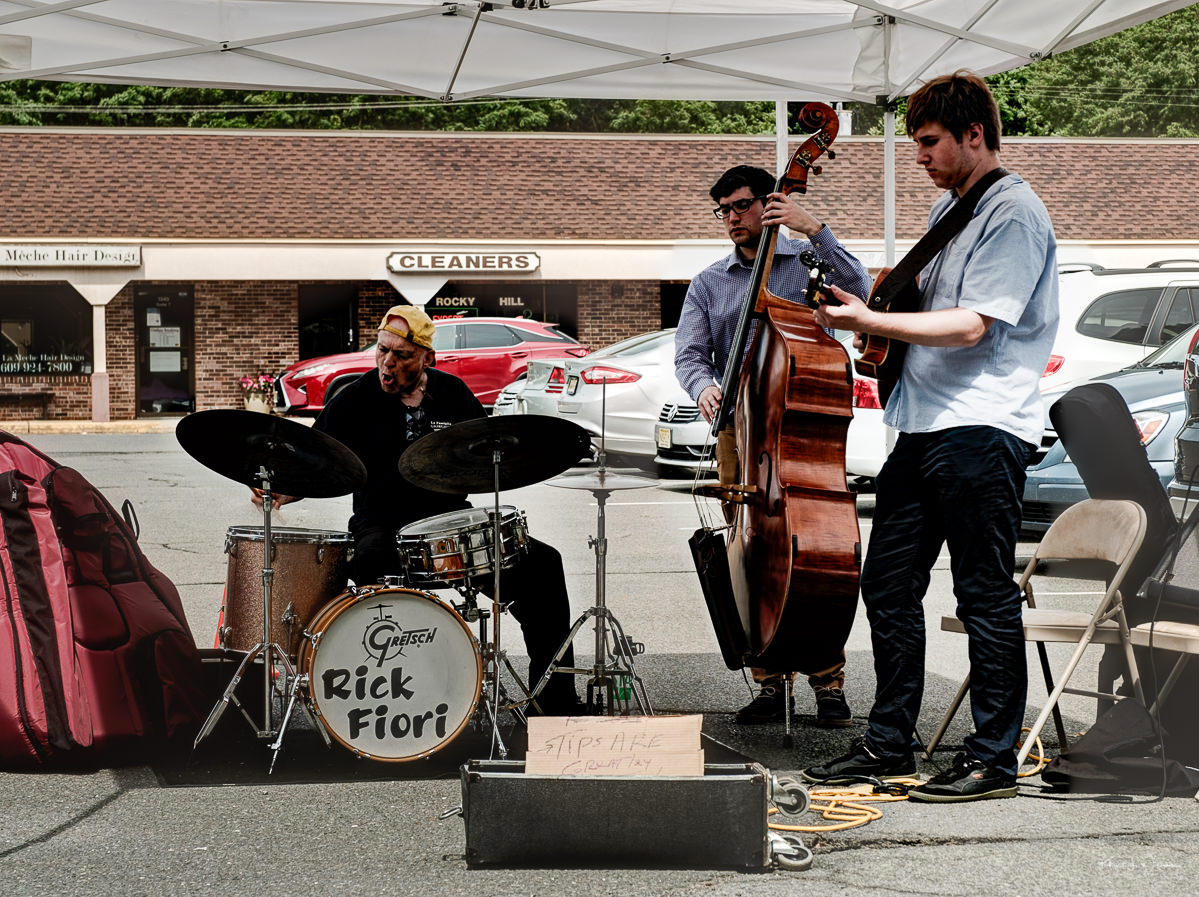 This morning I finally did that thing I've been thinking of doing for several years. I went to the Montgomery Friends Farmers’ Market like I normally would during market season, shopped at the market vendors like I normally would, but then I sat under one of the umbrellas and listened to band that was playing.