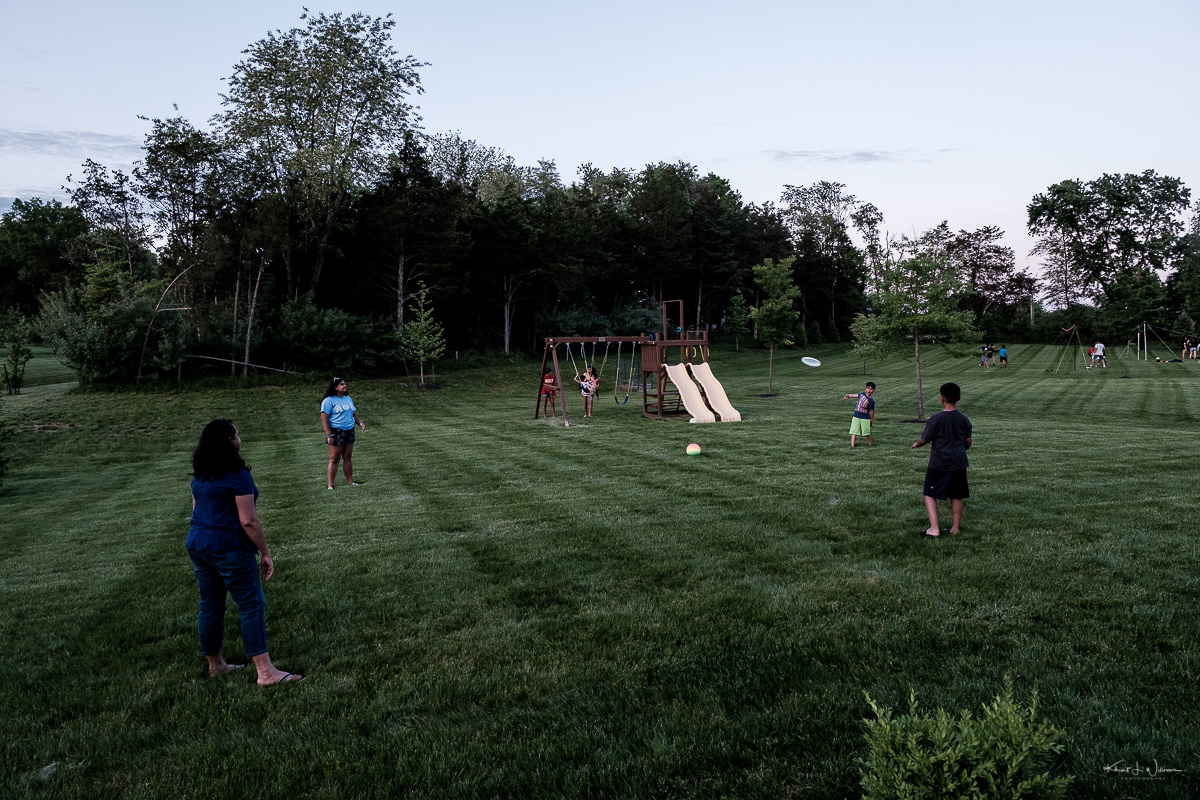 Yesterday, after the piano recital, we gathered with Nilima and her girls (Mukesh was working) at Falguni's home. Rohan and Rahul were excited. Dipan grilled hot dogs, marinated shrimp and lamb chops. We hung out, chatted, played frisbee, drank some beer and then ended the day with s'mores. Perfection.

Bhavna and I were not up for hosting Thanksgiving this year. Grave’s disease left me feeling exhausted and anxious. Bhavna has been very supportive taking on helping me schedule physician appointments and planning my calendar for pre-op and surgery. We were both feeling overwhelmed. We told friends and family that we would not be hosting this year.

Everyone was disappointed so Falguni and Dipan decided that they would host Thanksgiving this year.

That's what I am thankful for. That Bhavna and I have a support system. People who are there to pick us up, to carry our load, when we stumble and fall. These are the moments in life that I think makes for the best kind of memories.

I didn't take many photos (my eyes are irritated from Grave's Eye Disease) from last night, but I did capture a few moments.

Today we’re going to share our most memorable diabetes day. You can take this anywhere.... your or your loved one's diagnosis, a bad low, a bad high, a big success, any day that you’d like to share. (Thanks to Jasmine of Silver-Lined for this topic suggestion.)

Well, I remember being diagnosed. It wasn't a bad day per se. The week earlier I was on antibiotics for an upper respiratory infection and told to drink lots of liquids. So I did. I lost a lot of weight that week. I assumed it was from not eating enough -- being sick tends to reduce appetite. I had no problems drinking lots of liquids -- mostly ice water -- because I was very thirsty. I thought it was a side effect of the antibiotic.

My thirst continued into the following week and I continued to lose weight. My pants didn't fit me anymore. I lost a notch on my belt. I would go home exhausted but I chalked that up to a very active work day. My wife started calling me "old man" because I would go up to bed around 8 PM.

I had donated blood in the past so I signed up for the Red Cross donation at the office. I watched a bit of the move while chatting with the staff and eating a cookie. I was thirsty and drank two apple juice boxes before heading back to my desk. I met my wife for lunch and drank a very large carbonated beverage. Of course, all that drinking meant frequent men's room trips. I knew something wasn't quite right when I felt dizzy and the room started spinning. I stumbled back to my desk and called my wife to tell her I was coming home. I went to bed early feeling exhausted and extremely thirsty.

I woke up the next morning barely able to get out of bed. I felt like someone was sitting on my chest. I could barely move my arms or legs. I just wanted to go back to sleep. My wife called our family physician to ask if the antibiotics could cause fatigue and thirst. She described my symptoms. I'm not sure what the doctor told her but he scheduled an emergency appointment.

Almost as soon as we entered the exam room a nurse entered and took a blood sample. She didn't explain why and didn't do the regular blood pressure check. Odd. A few minutes later the doctor entered and said, "I have some bad news and some good news. You have Type 1 diabetes. Your blood glucose is over 500. You need to go to the emergency room. The good news is we caught it early before you passed out and the hospital is expecting you." He had already called ahead. He already knew what I needed.

My wife was crying. She was worried. We were admitted quickly -- they were waiting -- and I was put on intravenous insulin. I spent the next 24 hours on that a drip. I didn't sleep much but my wife went home to get a change of clothes and some much-needed rest. Hospitals are not conducive to rest. Every few hours someone would come in to test my blood glucose (BG) and adjust the insulin. The hospital endocrinologist came by with my family physician and talked a lot about how unusual this was. I guess it was the first time they had diagnosed latent autoimmune diabetes in an adult ( LADA ).

By the second day my BG had come down and I was told I would be discharged. I was allowed to eat breakfast. I liked Jello. I was taken off the drip and the nurses started injecting insulin from an insulin pen ( I didn't know what it was at the time ). I was told I was being discharged the next day if my BG was stable on the injected insulin. I had lunch and dinner in the hospital ( yuck ) and my BG remained stable.

Before I was discharged the nurses came into talk to me about insulin vials and how to give myself a shot with a needle. I looked at her and said, "What was that other thing you were using yesterday?". "Oh", she said, "the insulin pen?" I told her that I wanted a pen. Why would I want to worry about keeping insulin cools and air bubbles etc when all I needed was a pen?

I went home. And changed my life.