High speed photography is all about stopping time and seeing details that otherwise can’t be observed. With special equipment, timing, luck and good lighting you can images with lots of Wow! Join professional photographer Loren Fisher for a special workshop where we will stop objects as they  We will photograph a balloon popping just as it is being hit by a dart. It is so cool to see part of a balloon while the rest of it has already collapsed. …

Join professional photographers Loren Fisher and Ron Lake as we go on a special urban landscape photographic exploration of five of New York’s magnificent bridges. It will be a day packed full of fun photo opportunities at little known locations Loren and Ron have discovered and also at some popular spots. You will transported all day in Loren’s 12 passenger Sprinter van, so you don’t need to worry about how to get around. You’ll be taken to the closest possible … 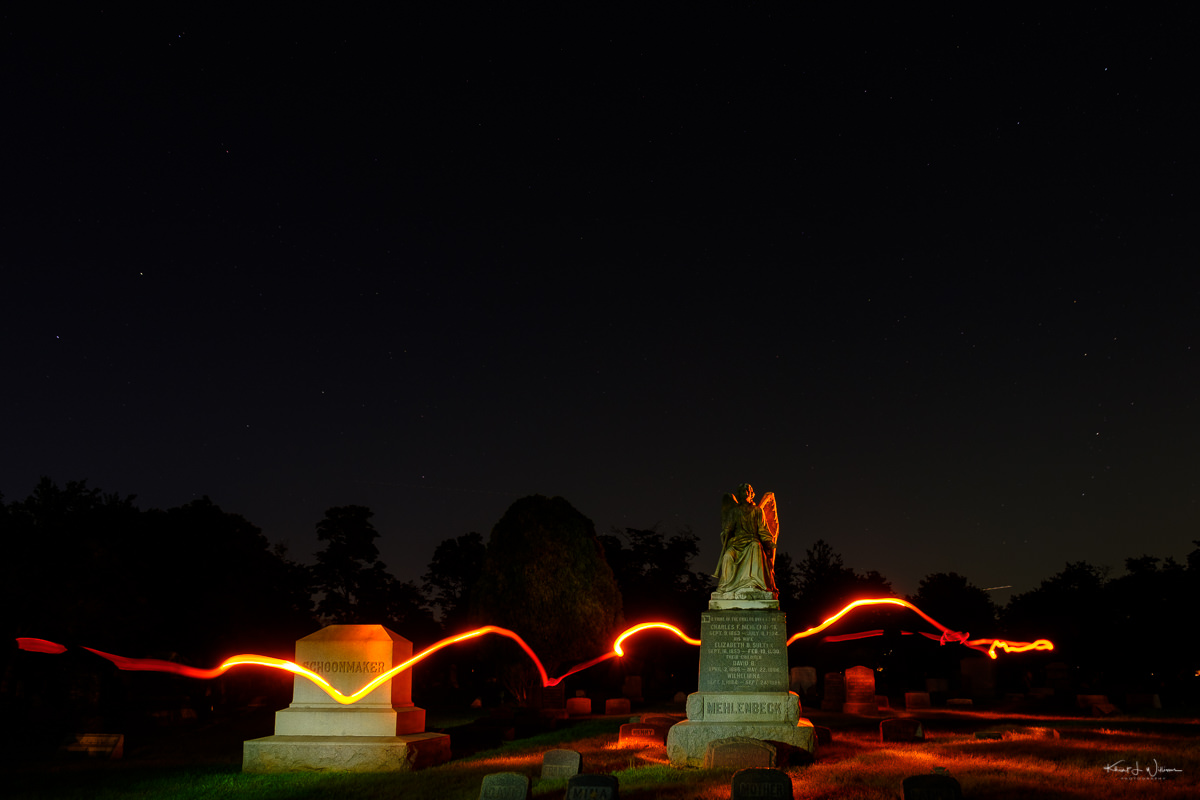 A months ago I attended a night photography workshop in Somerville, NJ led by photographer Loren Fisher. I’ve completed workshops and field trips on night photography with various instructors. Each instructor provides a different perspective and I was curious as to what Loren might do in this workshop.

We started in the Somerville Cemetery, a cemetery that has some large and spooky looking monuments. We met at Loren’s home in Somerville and drove over in a rented commuter van. We arrived at the cemetery before it was dark so there would still be some light in the sky to help set up the cameras. We had a full view of the night sky but as a state sandwich between two large metropolitan cities, there is so much light pollution in New Jersey that few stars are visible.

Loren gave the group some tips on setting our cameras for some light painting. I think I had an easier time setting up my camera. Changing the ISO, shutter speed and aperture was as easy as turning a dial. Loren used various coloured flashlights to illuminate dark objects — monuments and trees — in the cemetery. I am sure that for drivers passing by we made for a strange sight.

After we got out of the cemetery -- the zombies must have been on holiday -- we drove to downtown Somerville.

We also played with some long exposure tricks, like spinning the camera while photographing neon signs. It was a lot of fun.

We stopped at the intersection of North Bridge Street and Main Street to photography the light trails left by the tails lights of cars. Pedestrians and diners leaving bars and restaurants stopped to ask what was going on. Some of them looked at our group with a quizzical look. I imagined that some were thinking “what kind of weirdos stand out in the cold on street corners with a camera.”

One of our commented that a particular police car had driven by in both directions several times. Eventually, he stopped in the road and called out from his patrol car to ask what was going on. I don’t think he liked our answer. He drove away with an annoyed look. What does it say about our society if photography is a suspicious activity?

We finished the night on Division St., a pedestrian mall about half way down North Bridge Street.

Quotidian object and buildings and scenes look very different and interesting at night. This was the purpose of the workshop.