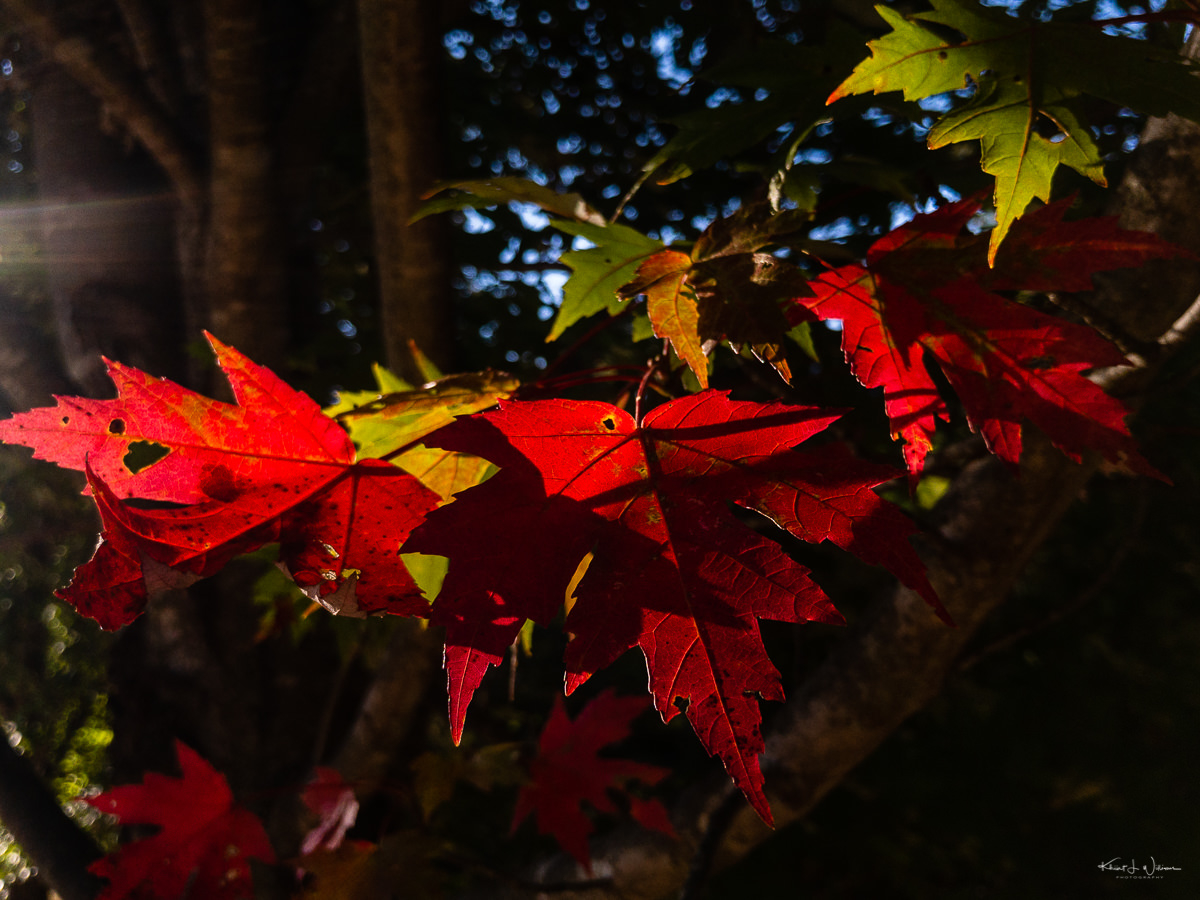 Ritchie Roesch posted his Five Tips for Fall Foliage Photography with Fujifilm X Cameras, which has excellent advice for capturing the fall colours. I especially liked his recommendations on which film simulations to use.

I live in New Jersey, just south of the “New England” states, and we do get some beautiful colours. I have many fall foliage images taken in various nearby locations around my area over the years, but I haven’t explored other New Jersey locations. Also, over the last few years, it seems that fall colour is coming later in the year and last just a few weeks.

As for lenses, I have only the Fujinon 16-55mmF2.8 R LM WR but even looking back at my Nikon images, I shot my fall images mostly at short focal lengths. I don’t do macro photography often enough to justify the cost of a macro lens. Do you have any suggestions for extension tubes for the Fujinon?

Perhaps the best light is “..is when the sun is behind the tree”, but that may be possible, because even “when the sun is low to the horizon”, it is blocked by a mountain range. In the past, I have captured most of my fall images from river beds or the edge of lakes, but I am open to finding locations to try new perspectives.

Except for Hacklebarney State Park, the best fall foliage locations in New Jersey are either at the far north-west (2-hour drive) of far north-east (3−4 hours drive) sections of the state and require extensive hiking to get to the views. Someday I’ll get to those distant locations. This fall, I hope to at least photograph on the Rock Brook or take my first hike through Hacklebarney State Park.

One new thing I want to try is a new Hoya 77mm Red Intensifier Glass Filter that I bought last year. It’s a ‘didymium’ filter that claims to enhance red, orange and brown subjects to give more colour saturation and contrast. I think it would probably pop fall colours when used with the Velvia film simulation.

The New Jersey state offices are closed for Columbus Day. I consult for the New Jersey Courts so I a holiday as well. After helping out my wife's office with some networking issues, I drove up to one of my favourite spots in Skillman. I parked at the Rock Brook along Hollow Road. I brought only my iPhone and my tripod. I have a smartphone holder clamped to the centre column of my tripod. I usually use it to hold my iPhone when I am doing long-exposures using the Trigger Trap app and dongle. But it also works nicely to keep my iPhone so that I can use as the primary camera. That's what I did. All the images below were captured on my iPhone 6 with either the native camera app, vividHDR or Slow Shutter. I imported the TIFF images to Adobe Lightroom, applied profile correction, and a Hazy Pop matte filter.

I was surprised by the number of leaves on the ground. The trees were still mostly green, and the air temperature was moderate, so I was surprised that many leaves had fallen from the trees. The leaves were soft, not crunchy as I had expected from how brown they were.

It was quiet as I made my way down to the water.

As I approached the edge of the brook, leaves and trees gave way to the multitude of rocks that provide the brook its name. There were few leaves on the ground here. Mostly grass that found a way to thrive between the stones. I could hear the water flowing nearby.

I imagined that in a few weeks as the cooler air and dwindling sunlight causes more leaves to change colours and fall, the rock bed will be covered in orange and red.

While I set up the tripod near the "falls", I saw a few frogs hopping around. This one decided to keep me company. I very carefully set the tripod up so that I could get a close. I wish I had one of those Moment zoom lenses for the iPod. It took a few tries before the frogs were comfortable with my presence and sat still long enough for me to grab a few shots.

The "falls" is just a stack of large boulders that have formed a natural dam in the brook. The water pours over the rock, and I shot these images using the Slow Shutter app to give the water that silky smooth look you get when shooting long exposures on a DSLR.

While the Slow Shutter Cam captured the "falls" I looked around. I noticed this stack of rocks. I guess someone was down there before me and decided to add some artwork. I like it. 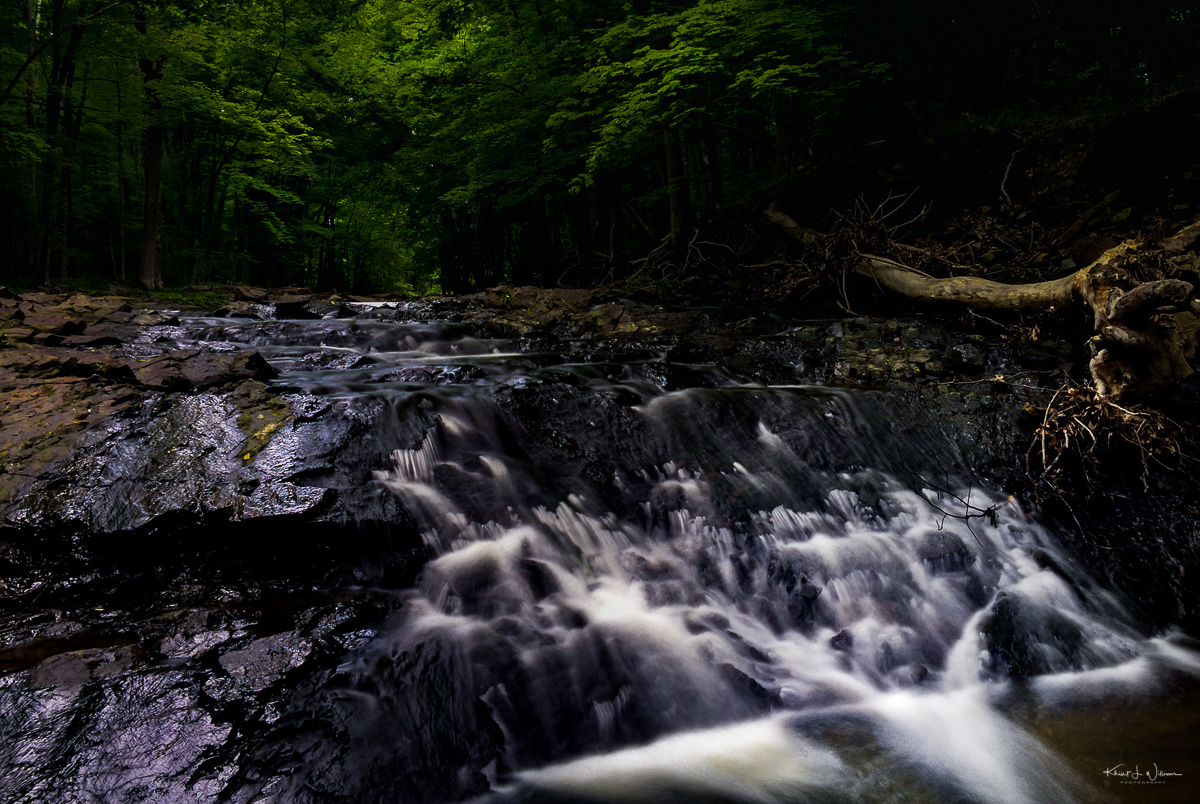 I took the day off to relax a bit. My son Shaan came home early from school -- he has a study break for exams this week -- so I took him out for lunch at the One53 restaurant in Rocky Hill. We talked about college, school, and world history. I then persuaded him to come with me to the Rock Brook in Skillman. I wanted to test out an iPhone app I recently discovered called Slow Shutter Cam. It's for creating long exposure images.

The app creates these images by combining multiple exposures using a clever image algorithm. I then made some quick adjustments in Photogene for iOS. The photo above was edited solely on my iPhone 6.

The image above was tweaked in Adobe Photoshop Lightroom.