On Saturday, I woke up, got dressed and drove to Aunt Chubby's in Hopewell for breakfast. Before my health challenges started, Aunt Molly was my favourite weekend treat but I hadn't been there in several months. I packed my Fujifilm X-T2 + Fujinon XF16-55mmF2.8 R LM WR, iPad and Bluetooth headphones. I wanted to get to Aunt Chubby's just as they opened to get a seat in the corner, to read blog posts while listening to music. I found parking right out front, which is rare, but now I know how to avoid the weekend breakfast crowd. Aunt Chubby's is walking distance from most of the homes in Hopewell Borough.

I found a table near the rear of the restaurant and my attentive table attendant took my order, avocado toast with a poached egg on top and a cappuccino. The restaurant was still mostly empty with one man sitting at the breakfast bar, and a few friends sitting in the other room.

During my commute last week, I caught up on listening to episodes of the FujiCast podcast, which I missed while going through my health challenges during the last few months. The universe must be sending me a message because on this particular FujiCast episode, Ian MacDonald, was a guest talking about how photography helps him treat and overcome PTSD caused by years working in emergency medical services (EMS).

This got me to thinking about how much I missed my form of stress reduction therapy, being outside walking around with my camera on the nature trails of the Sourlands. I finished eating and while I waited for my check, I looked up as Jeff Hoagland had walked in and sat down at the breakfast counter.

Jeff Hoagland is a lifelong naturalist and the Education Director for the Watershed Institute. The institute is championed for the environment of 950 acres of streams and woodlands in Hopewell Township. I met Jeff over a decade ago when I took my then elementary school children on an ambling nature walk along one of the streams in Montgomery Township. My kids had a blast and over the years we took many more walks with Jeff. He's also a fan of craft ale and we often see each other in line during a crowler release at Troon Brewing.

In 2004, the Diocese of Trenton asked D&R Greenway to preserve the property for $11 million. Working with our state, county, and local partners, we secured $8 million in public funding. The remaining $3 million needed to be raised from private sources. Faced with the frightening prospect of unwanted development, in the summer of 2006, a group of concerned Hopewell residents stepped forward to raise the remaining funds required to preserve the St. Michael's Preserve land.

The St. Michael's Preserve property had been owned by the Diocese of Trenton since the 1890s upon which an orphanage and industrial school were built in 1896. The facility closed in 1973.

Aunt Molly Road is about a five-minute drive from Aunt Chubby's. I parked, donned my headphones, and started streaming Pink Floyd's Dark Side of the Moon, while I walked along the frozen trail, stopping to take photos of the woods and trail path with the changing morning light streaming through. I could hear the crunch of frozen dirt, grass, and ice underfoot.

A man with a dog approached from a fork in the path. I removed my headphones, said hello and commented about the cold. It was cold. I have not walked this trail before so I had no specific agenda for images. I listened to Dark Side of the Moon, stopping to photograph whatever light caught my eye. I found myself just stopping and standing to stare at the light, getting lost in my mind. Relaxing.

I got as far as the bridge before the cold air, despite gloves and thick socks, started to gnaw at fingers and toes. 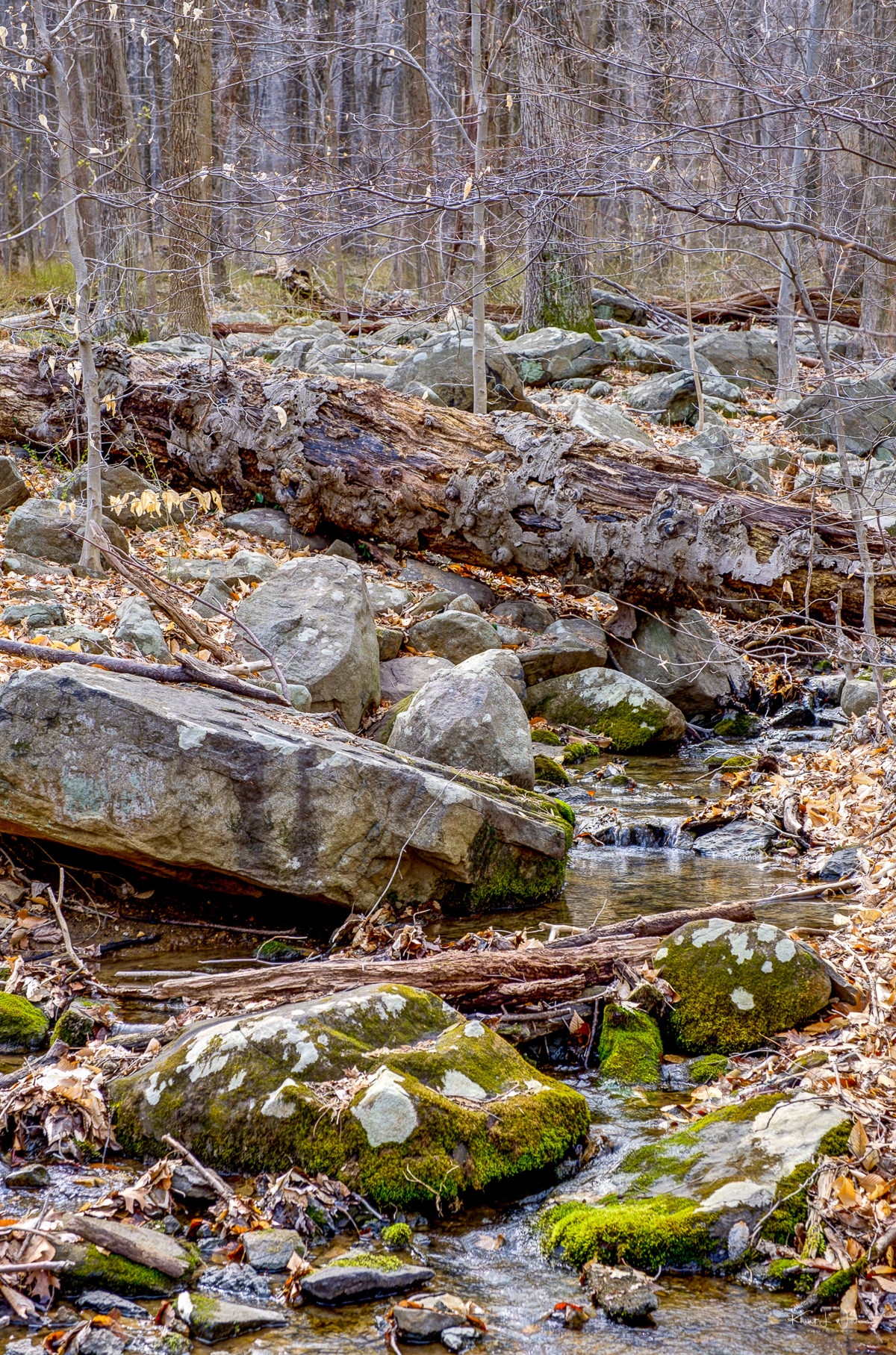 My first thought when I saw the challenge was, "I'll hike the Sourland Mountain Preserve to Devil's Half Acre". Bhavna offered to come with me. The parking in the area near the trailhead on Mountain View Road was filled with cars.

Devil's Half Acre is a large boulder field with talus caves which can be approached through the Sourland Mountain Preserve by taking the northernmost trail 3⁄4 of the way up and then heading about 1⁄2 mile to the north/northwest.

The warmer weather seduced local area residents and their dogs to enjoy the outdoors. We started up over the rocky terrain. I scrambled, took this shot and noticed that Bhavna was way behind me.

While on Hike and Hops at St. Michaels Farm Preserve a few weeks ago, we both injured our feet. It seems Bhavna didn't recover as quickly as I did. Her mind was willing, but her body was not able. We walked the shortest part of the trail returning to the car, just thirty minutes after starting. I got this shot and a few others.

To fend off seasonal affective disorder (SAD) and get some fresh air, Bhavna and I decided that in 2019 we would find our way outside despite both hating the cold. We joined the REI co-op, bought some base layers, and new jackets, hiking boots, etc. After three months of staying indoors drinking craft ales, I start to look and feel "round", especially in. my belly.

One of the perks of joining the REI Co-op is that we get access to classes about hammocking, hiking, biking etc. This past weekend Bhavana and I signed up for a beginner's hike; the Hike and Hops at St. Michael's Farm Preserve. The Lawrenceville REI Co-op organised this hike. When we awoke that morning, Bhavna and I were sure REI would cancel the walk. It had rained the night before, and the warmer air temp was melting the snow. We expected the trail would be too wet to hike. It was too wet but not so much to cancel the hike. We layered up and drove to the trailhead on Princeton Avenue to find a group of about eight people waiting in the parking lot.

Some history on the property is provided by the D&R Greenway Land Trust.

Now over 400 acres, the St. Michael's property, which was preserved in 2010 and expanded in 2017, is an expanse of farm fields and forests on the edge of Hopewell Borough. From many parts of this preserve, the visitor has long views, lending the preserve a wonderful expansiveness which promotes a sense of well-being in anyone who walks its many farm roads and paths. From 1896 until 1973 this was the home of St. Michael’s Orphanage and Industrial School which was operated by the Catholic Diocese of Trenton. After the orphanage was closed, the building where the children lived and went to school was torn down and most of the land was leased to a local farmer. Before the diocese divested themselves of the property through development they offered one last chance for preservation if D&R Greenway could raise the funds to purchase the property. Over $11 million was raised, and in 2010 D&R Greenway succeeded in purchasing the land through a public/private partnership. It is now preserved as open space forever. The largest amount of the $11M purchase price for this property came from the State farmland preservation program. Six miles of farm roads provide walking trails throughout the preserve.

We met the trail guide Dan and his friend John. John lives in the area and is an educator in a local public school. We were given an overview of the trail and a history of St. Michael's Farm before proceeding along a soggy and muddy open field. We struggled to make our way back to more solid ground, and since I stopped for Bhavna and to take photos, we fell behind the rest of the group.

The trail was soggy; perhaps boggy is a better word. Our guide Dan had to choose alternative paths across some of the streams. On the trail, we ducked under fallen trees and scrambled over others. We forded streams with water just barely under the ankle of the shoe. Water entered Bhavna's shoes.

I'm working from home today. We both injured a foot this weekend while on this beginner's hike. I think the issue is that we are both barefoot inside our house. We only wear shoes for work or to go hiking. For both of us, wearing shoes is an exercise in damage control. When I wear shoes outside on walks and hike along difficult terrain, my toes curl inside the shoe; trying to get a grip. This action stresses my toes. Is this the reason Westerners have such ugly feet? It's damaged from years of doing the opposite of what nature intended?

What made the trek worthwhile was the camaraderie of the group during the hike and the post-hike Troon craft ale we drank together at the Brick Farm Tavern.