I do not use openSUSE but it is nice to see another community develop around a commercial distro. I stuck with Red Hat because it's what employers wanted on the resume and the Fedora Core community helped develop my skills.

Jeff Ventura, a blogger over at Graceful Flavor, has written an invective about the Linux desktop. He claims that Linux on the desktop is not viable and remain so for the foreseeable future.

LOTD is, and has always been, a total non-starter outside the hobbyist and tech-elite crowds, and it will remain so for quite some time, if not forever.

Well, Jeff, I think you are wrong and I will prove it.

About three years ago I converted my wife's Dell laptop into a Linux desktop. It took me a few hours to download and burn the ISO image of Fedora Core 3 to disk but installation progressed smoothly after that. I ran into a small snag with the drivers for the Linksys 802.11g wireless NIC but after a few weeks of lurking in the message boards I had successfully compiled and installed the driver code.

I went about the task of configuring her desktop environment. She was used to inserting movies into the DVD drive and Windows would launch her movie player software. After a few months I had that working quite well. It took a little less time to find a suitable media player that would launch and play her music CDs but once I had that working we were home free.

My wife was very happy with her Linux desktop. So Jeff, given enough time and effort and 24⁄7 tech support Linux is definitely a viable desktop alternative.

I am not quite sure why I switched her back to Windows. Now let me get back to reading the blogs. My MacBook is getting lonely. 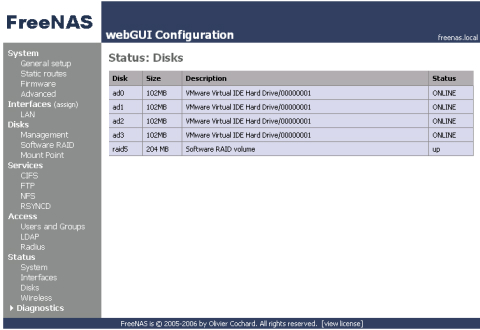 I have an old Dell XPS that I am thinking of making into a file server. The computer currently has Windows XP SP2 installed. The fan in this machine is extremely noisy and always has been. I have on the floor next to my desk and the noise is very irritating when I am working on my mac mini which makes almost no noise. The machine is maxed out on RAM ( 512 MB ) with a 750 MHz Intel Pentium and a 80GB hard drive. Ok...this post is so disorganised.

I want to move this machine as far away from my workspace as possible. My workspace is in my unfinished basement so I have few options on where I can place this computer. There are only two electrical outlets in the basement and one of the two is in use by the washer and dryer. The other has a large freezer and one free socket. I can place the server on the fridge but my LinkSys WRT54G is on the opposite side of the basement; about 25-30 feet away. I'll need quite a long bit of CAT5 cable strung accross the rafters.

My requirements are simple:

Thinking about the architecture of the file server I have a few options:

I am partial to the Fedora Core/Samba/Netatalk solution because I am already familiar with Fedora Core and I could leverage other elements of the server for Web and application services (Apache/MySQL/PHP). Netatalk is a freely-available, kernel level implementation of the AppleTalk Protocol Suite. I am not familiar with Netatalk but I would either have to build from source or search the net for a Fedora Core RPM. Building from source is easy depending on how quickly one can also build/install any requisite libraries.

The Windows XP solution would be quickest to implement at this point since the OS is already installed. However, I may have difficulty finding and AFP server for Windows. I have a number of Macs on the network and would prefer to use AFP for those computers.

The FreeNAS install would be the most challenging for me since I have not experience with BSD (does OS-X count?).

I am partial to the FreeNAS implementation since it's a complete package where most of the work has been done and configuration is done via a web interface. I can treat the installation as a"black box" similar to something purchased from Linksys.

Update: I installed the FreeNAS server and in under 15 minutes I had a working NAS. Performance wise FreeNAS is very fast. Dragging and dropping files from my macbook to the mounted FreeNAS drive was just as fast as on a drive installed in the local machine. I think I have found my solution. I will wait a week to be sure the system is stable before commiting my important files.