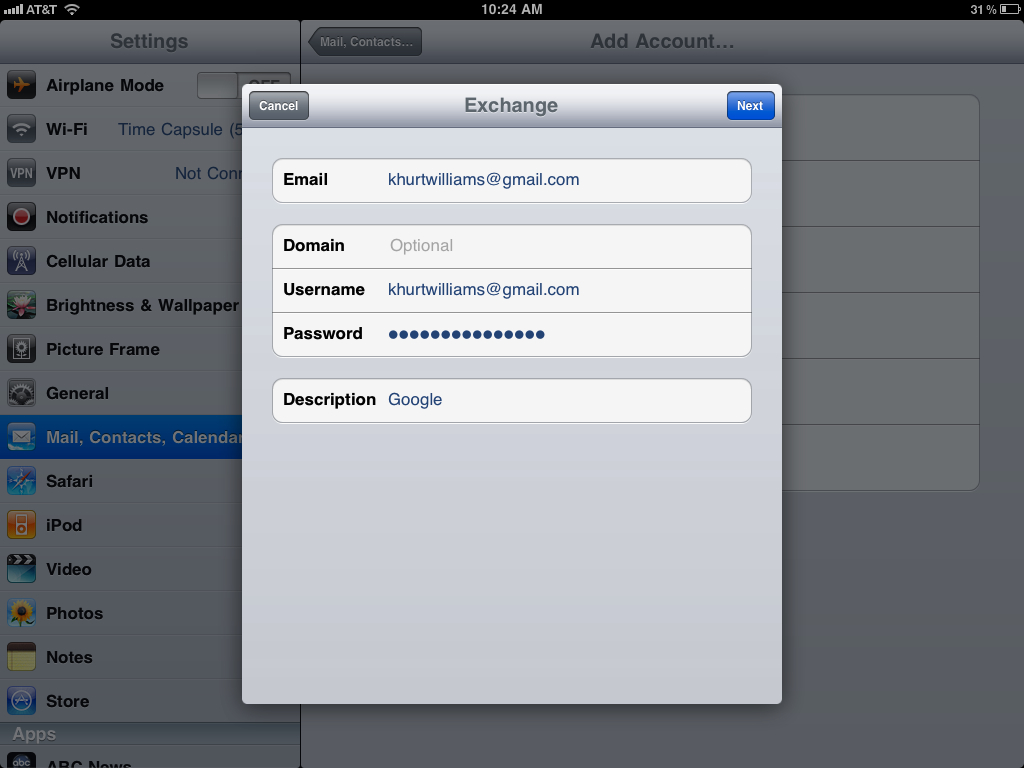 During the day he might add one or more contacts to his iPad. At some point he would need to craft an email using Gmail in a browser and the contact would not be available because he had not yet synced his iPad to iTunes.

While working at his desk, he was used to using Microsoft Outlook and having one place to access his email, calendar and contacts. During meetings, he could continue his collaboration from his iPad. It was configured to so that the Mail, Calendar and Contact apps synchronized with the corporate servers. Add a meeting to his iPad calendar and it was added to his Outlook calendar. He had all his contacts and email at his fingertips and he could continue working as though he was sitting in his office. Good for him that it is easy to set up an iPad (or iPhone) to use Google's services in this way.

Although Apple's iOS provides a native method to connect devices -- iPad, iPhone and iPod Touch -- to Google services, that connection is limited to Gmail and Google Calendar. To sync your Google Contacts to your device you have to use iTunes. However, as Google began to push their services into the enterprise collaboration space Google realized that it would be an easier sell if users could continue using the desktop software to which they were accustomed. That meant supporting Microsoft Outlook desktop software and Microsoft Exchange services for mobile devices. A lot of corporate users were connecting their iPhone and Android devices via ActiveSync to the corporate Exchange servers.

ActiveSync is a mobile data synchronization technology and protocol developed by Microsoft, originally released in 1996 ... which provides push synchronization of contacts, calendars, tasks, and email between ActiveSync-enabled servers and devices.1

The advantages of using this service are as follows:

Before we setup our device(s) we want to make sure to create at least one recent backup via iTunes sync. Despite Apple's and Google's best attempts devices and software services sometimes fail. If your data is at all important to you then you'll head my advice. Perform a sync with iTunes to make sure that Contacts and Calendars from your iOS device are backed up to your computer.

Once the back is complete do the following tasks. I've included screen shots to make things a little easier to follow.

From the Settings screen of your device tap the Mail, Contacts, Calendars section and then Add Account... Enter your Google account information. The description field defaults to Exchange. If you already have a corporate Exchange account setup on your device you may want to change this to something else. Tap Next. Enter the Server information. The Google ActiveSync service is hosted at m.google.com. Tap Next. You can choose to sync all three services on disable services you don't need. Tap Save. Once the account is setup you will want to tap the entry to change some of the default settings. By default ActiveSync will only sync the default Inbox and 3 Days of email. If you want access to all your email choose No Limit. You may want to sync some of the other mail folders such as the Sent* and Drafts folders. Your Mail, Calendar and Contacts are now being synced with Google over the air. Be sure to turn off syncing in iTunes before syncing your iOS device. Having both Google Sync and iTunes syncing enabled can lead to data corruption and duplication. Google provides a method for accessing their Gmail service via the IMAP protocol. IMAP is a standard protocol for accessing email but unlike POP3 the email stays on the remote server. With POP3 you are limited to reading your email from one location. With IMAP the email stays on the server and you can read it from any computer. IMAP is the method I use to access my Gmail in Apple Mail. If I read an email in a web browser then it is marked as read on the server and in Mail.app. The iPad also has support for IMAP. Google provides no instruction on how to access the calendar service via the iPad but setup is fairly easy.

Google provides a method for accessing their Calendar service via the CalDAV protocol. CalDAV is a standard protocol that allows access to web based calendars from desktop clients like iCal. From iCal I can create calendar entries that appear in my Google web calendar and vice versa. The iPad also has support for CalDAV. Google provides no instruction on how to access the calendar service via the iPad but setup is fairly easy.

To first thing we need to do is launch the Settings app on the iPad and click the Mail, Contact, Calendar tab.  We will be presented with several options but we are going to select Gmail.

Enter your email address, password. The Description field is optional but go ahead an enter something to identify the account especially if you have multiple email account.  Then select Next.

You will get a message that your account is being verified.

If your user-name and password are correct, the iPad will login you in and return you to the Mail, Contact, Calendar tab. You will now see a list of your mail and calendar accounts. Select the Mail account you just created (this is why it's important to enter something in the Description field). We are going to ensure that we are communicating securely with Google's servers.  Select Advanced?

Select the switch to ensure that SSL is enabled. SSL is a encryption technology that ensures that the communication between your iPad and Google's servers stays secure. Select "Done" and your mail account will be setup.

Email setup is now complete. Now for calendar. Back at the Add Account screen, select Other. From this screen select Add CalDAV Account.

Enter www.google.com for the server and then add your Google Apps email address and password. If you have a Gmail account enter your email address.  Select None.  You don't need to add anything under Advanced so just go ahead and select Done.  Once your account information is verified you will be returned to the main Mail, Contact, Calendar tab?

You should now be able to sync your calendar and email with Google's services.

Neither Google nor Apple provide a way sync Google Contacts with the iPad directly as we have done above with Mail and Calendar.  However, all is not lost.  Apple provides a way via iTunes and setup is easy.

Plug in your iPad and then select it in iTunes.

Select the the Info tab.  Click the Sync Address Book Contact check-box.  Then select the All contacts radio button.  Next, select the Sync Google Contacts check-box and click the Configure button.

I love Google Apps and I am excited that I can check or update my mail, calendar or contacts from anywhere - a browser, my Mac, and now, my iPad.  I have also written articles on how to sync Google Apps with Mail, Calendar, and Contacts with your iMac.

Some time last year Google updated their online Calendar service to support the CalDAV protocol. CalDAV is a standard protocol that allows access to web-based calendars from desktop clients like iCal. Now from within iCal I can schedule create calendar entries that appear in my Google web calendar and vice versa. Google provides instructions on how to set up iCal to access Google Calendar but ... a screen shot is worth a thousand lines of text. After a few seconds the application will display your Google Calendars. Select the calendars you want to add to iCal and click the "Add to iCal" button. If your email address is not in your Leopard Address Book you will be prompted to do so.