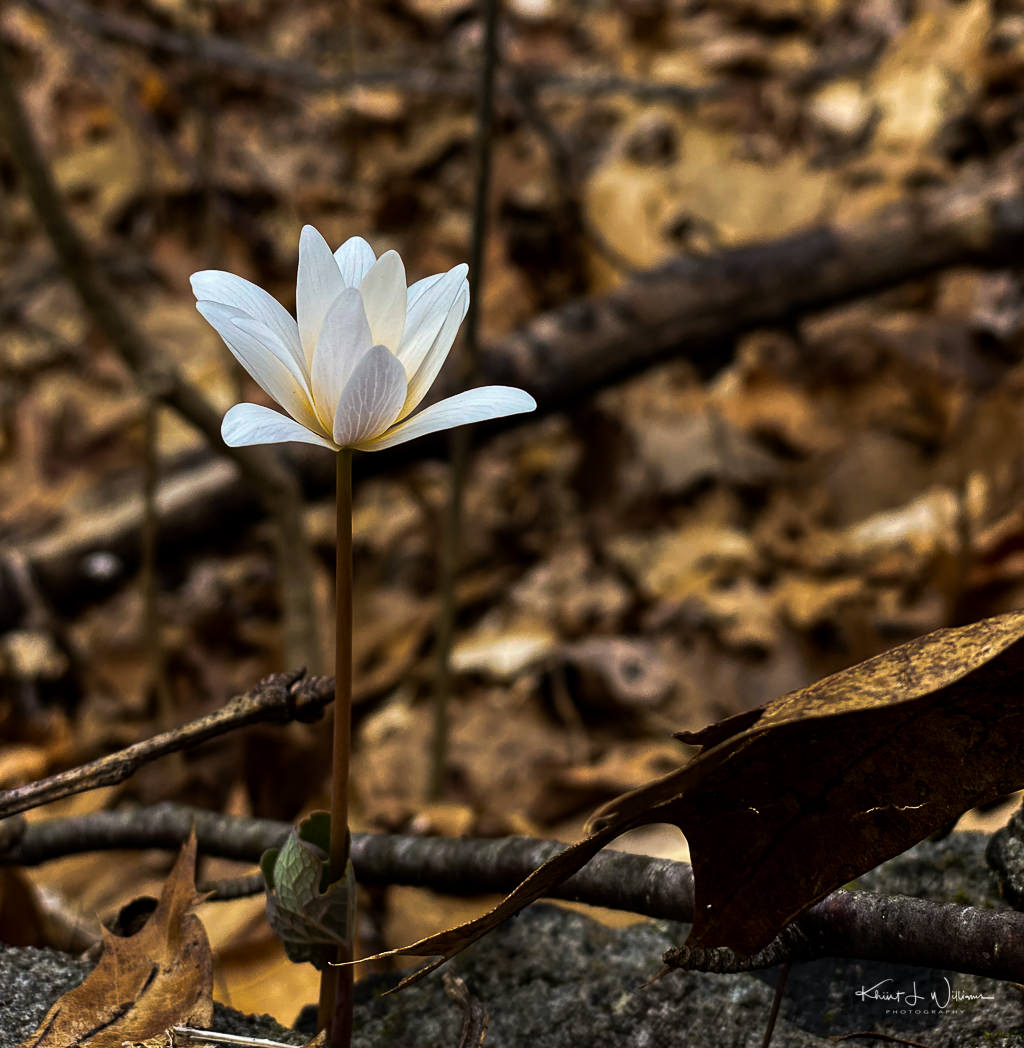 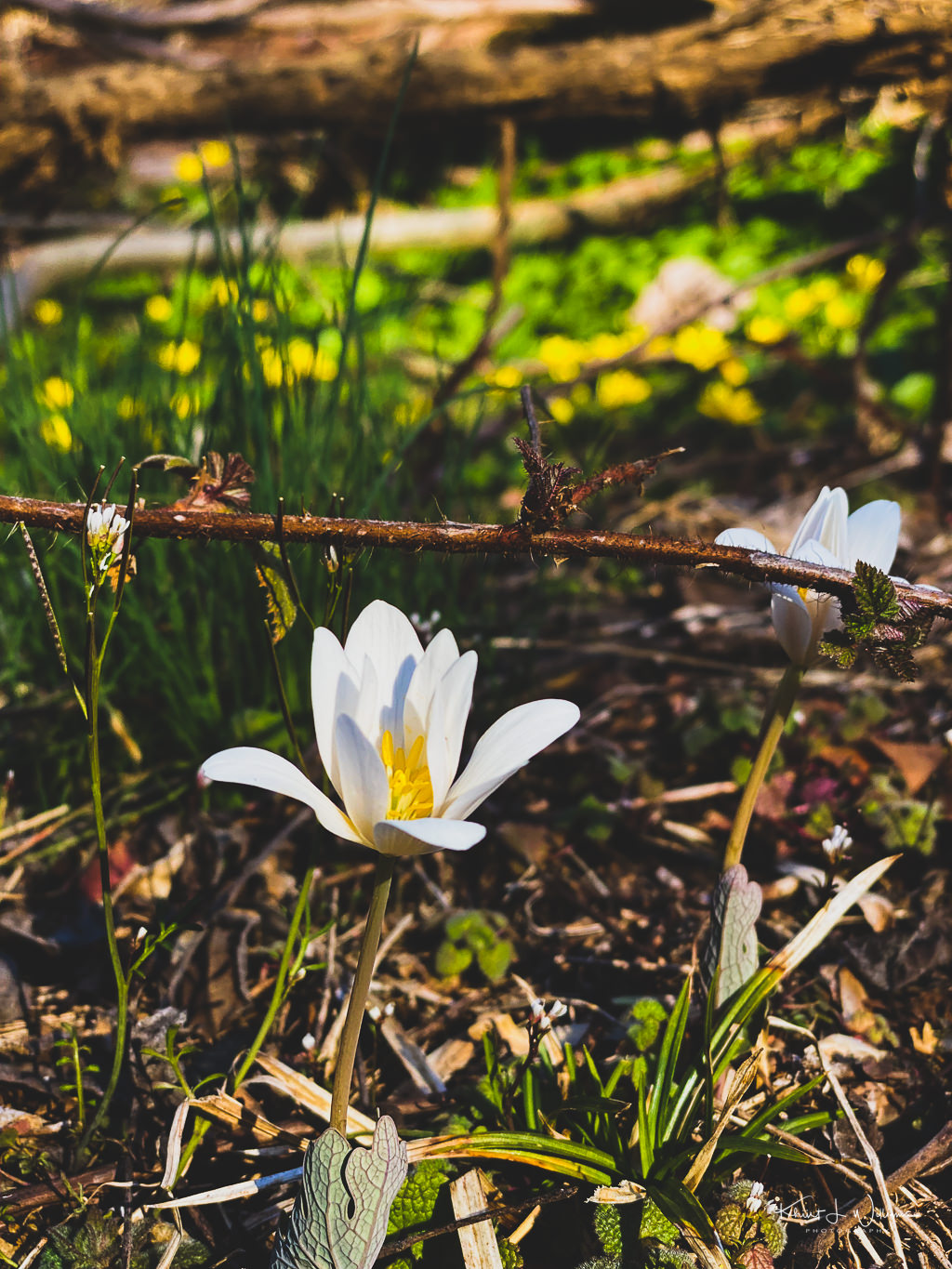 As you can tell if you have read the other post on my blog this week, I have been venturing out to the nearby nature trails in search of early spring wildflowers. The featured image is of Sanguinaria canadensis, commonly known as bloodroot.. The little flowers are the first signs to me that nature had entered a period of new growth after the cold, dreary months have passed. Seeing these wildflowers whose blooms last for a relatively short time give me a sense of normalcy to the health danger we now all face.

I used the rear 6mm f/2 "telephoto" lens which has an approximate 35mm equivalent of a 51mm lens. It's great for portraits but can also be used to "zoom" in on small subjects.

Like most of my iPhone images, this one was capture in Adobe Lightroom Mobile. I applied my "iPhone Filmic" preset in Adobe Lightroom on my macOS. Amy Maranto has given a humorous response to the challenge with an unusual portrait. TiongHan give me a lot to think about in his response to the challenge. He learns a lot about patience and restraint and "the Japanese way". The Only D800 in the Hameau shows us the new growth of the bay leaf plant, an essential ingredient in cooking and cocktails.

Submitted for my 52 Week Smartphone Challenge. 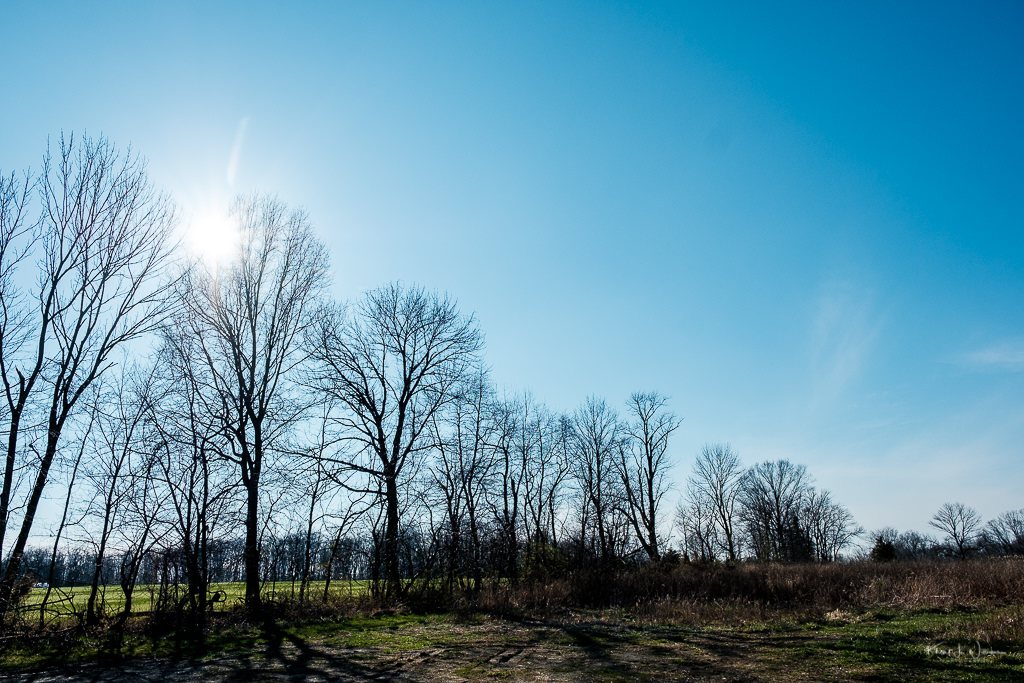 The weather was gorgeous today. I wanted so badly to take my camera and head into the woods, but I got my work done and waited for Bhavna to come home from work. She saw I was excited and agreed to go with me to Pryde's Point-Alexauken Creek Trail. We'd never been to this trail in West Amwell Township before, but it was only twenty minutes from our home. We have friends who live in Lambertville, just across the bridge from New Hope, Pennsylvania. I'm not expert with a map, but I think Pryde's Point-Alexauken Creek Trail is on the eastern side of Lambertville near the township line with West Amwell Township.

The town of Lambertville is located on the Delaware River in the southwestern portion of Hunterdon County. During the 18th century, the area was named after various operators of ferries across the river to Pennsylvania. The ferries established the western terminus of the New Jersey portion of the road connecting New York City and Philadelphia. In 1810 when the post office was established, the town was named Lambertville in honour of John Lambert, a resident who had served as United States Senator and Acting Governor of New Jersey.

The Delaware and Raritan Canal figure prominently in Lamberville's history. During the construction, an epidemic of cholera broke out in 1832. Of the thousands of Irish immigrant men hired to dig the canal with pick and shovel, dozens of were buried along the banks of the canal and the Delaware River.

We pulled into the Rocktown Road Entrance of the Pryde's Point-Alexauken Creek Trail and parked in dirt patch near the trailhead and walked along the very muddy trail along a grassy field, the edge of a fenced area next to a farm. The path led into a wooded area with twists and turned toward an area with several different trails intersecting. We shrugged our shoulder and set right on another trail along another grassy area toward another intersecting path which went downhill.

We walked and talked and talked some more. Bhavna is concerned about my anxiety. She knows that I do not like the indefinite nature of the "shelter-at-home" order. She knows how much I suffered last year with my health and my father's death. She knows how much I was looking forward to getting out and living life. We both agreed that suspending my Facebook account was a good move. She's worried about the kids too, especially our youngest who had some significant challenges last year.

We came upon a clump of trees under which was flooded with water and heard a bullfrog call out. We looked for the frog but could not locate him. He must have been spooked because he stopped making noises. We paused and looked for another five minutes before moving along.

It was at this point that Bhavna, who was further ahead due to stopping to take photographs, called out that she had found some pretty white flowers. Yes! She had found a patch of bloodroot. So many specimens were growing in the dry leaves under the brush. I was so excited and got down on my knees to take photos. I suddenly realised how much I wanted a macro lens.

Bloodroot is a plant native to the eastern part of the United States and Canada. The plant is called bloodroot because when cut the root and budding rootstalk, the rhizome, secrete a red fluid. I didn't experience this myself, and I refuse to pick or damage the plant. I want to encourage the growth and spread of native plants.

Bhavna has hiking boots but opted to wear her sneakers. She was annoyed that her sneakers were muddy and some of the water had seeped into her shoes and socks. She wanted to turn back, but I convinced her to push just a little further until we came upon an abandoned house which was overrun with trees. Bhavna thought it was occupied and considered that maybe we were trespassing until I showed her the spooky-looking windows. I think we were on the Hedgerow Trail.

We continued past the house toward a small mossy stream where I stood for a moment enjoying the calm. When I drive out to the Rock Brook, I often like to stand or sit and listen to the water flowing over the rocks. I find it very relaxing.

But cognizant of the time and Bhavana's patience I didn't stand for too long. We turned around and walked back the way we came. I am appreciative that we can have these trips. I know that many people in cities may not have this natural daily respite from the COVID-19 restrictions. Hopefully, we get more sunny days. Bhavna told Shaan and Kiran about our walk, and they are excited to join us for the next one.

I think this is my fourth (or is it fifth) entry for Jeff's isolation project.