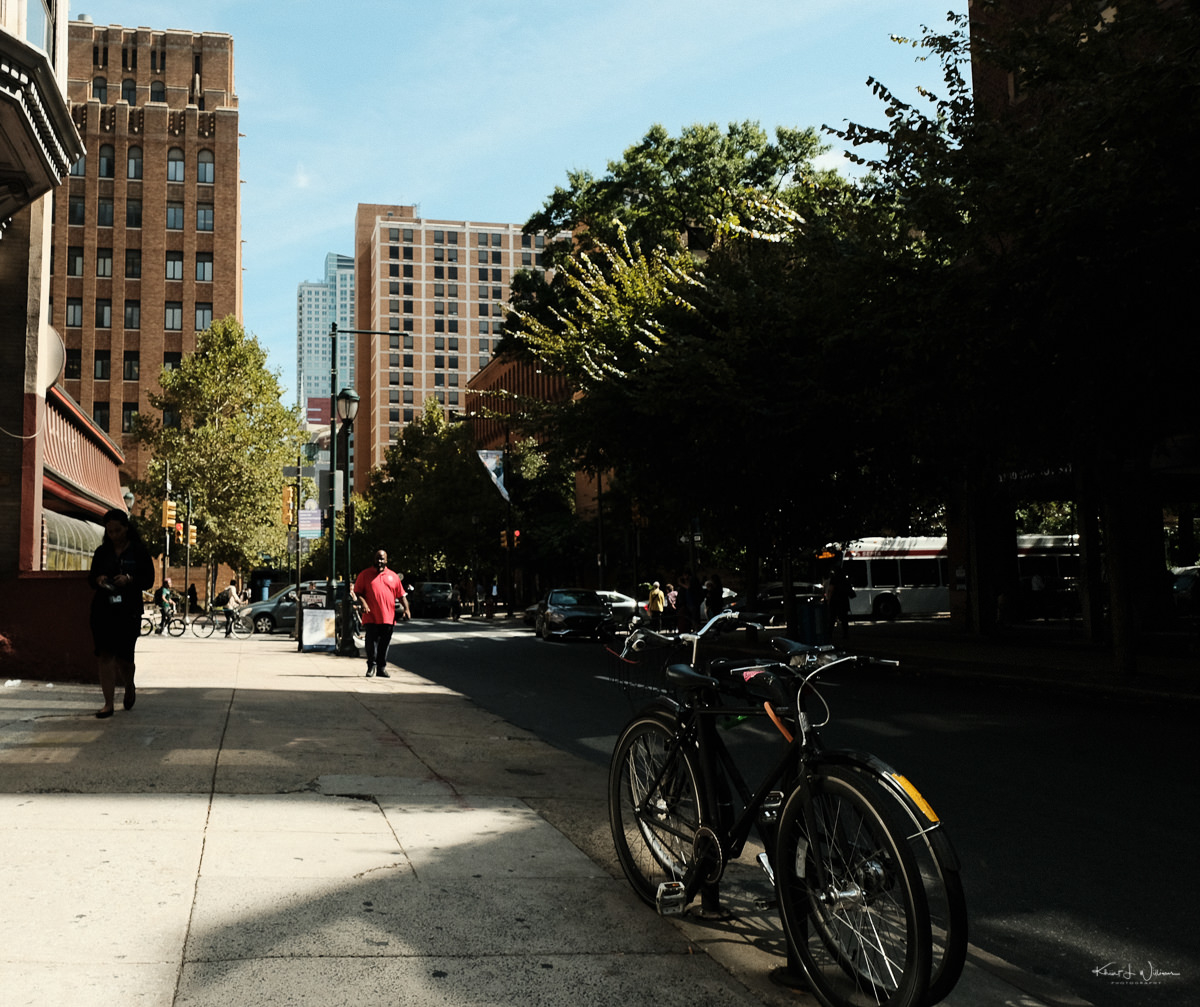 I walked around from the northern end of Princeton University campus to the southern end. I parked on Moore Street and crossed Nassau Street and headed south toward Thomas Sweets.

My intent was to do some street photography but I lost my confidence. I walked through the parking lot toward William Street. I crossed Williams Street and walked the footpath back toward Scudder Plaza.

I saw the bike in one of the entrances to the Julis Romo Rabinowitz Building. I liked the look of the bike sitting in the dark with a bit of light coming through the pillars.

The Julis Romo Rabinowitz Building and the Louis A. Simpson International Building (formally 20 Washington Road) renovation project will repurpose the former Frick Chemistry Laboratory and bring together academic and administrative areas that are now dispersed across the University campus.

I continued across Scudder Plaza, stopping for fifteen minutes to talk to and photography some skateboarders.

While I waited at the cross-walk some visitors from the UAE asked me to take a photo of their family. I continued across Washington Road with no particular goal in mind.

I saw this bicycle outside of what I think is 1879 Hall or Marx Hall. Many of the buildings on campus are joined by hallways and it can be challenging to tell which is which.

It was not until I was halfway through my walk that I realized I was taking photos of lonely bicycles. At this point, I decided I would continue my walk while keeping an eye out for bicycles.

I continued across campus toward Nassau Hall. I cross the diag and came upon Stanhope Hall. In all the years that I have walked across campus, this was my first time noticing this building.

Stanhope Hall, the University's third oldest building, was erected in 1803. It originally housed the college library, study halls, and the two literary societies, Whig and Clio, and was called the Library. Later it contained ~the ``geological cabinet'' and lecture rooms and was known as Geological Hall. Still, later it contained the offices of the treasurer and the superintendent of Grounds and Buildings and, for a time, the meeting room of the Faculty and was called the College Offices and then the University Offices. In 1915 the trustees gave it its present name in honour of Samuel Stanhope Smith, who was president when it was built. In recent years Stanhope has housed the University's communications and security offices.

I walked around toward Blair Hall and found my way walking through the arched corridors between the buildings of Rockefeller College.

My fingers were feeling almost frostbitten so I walked out onto Nassau Street and headed back to my car. In a follow-up post, I’ll give my thoughts on the street photography I captured that afternoon.