Two weekends ago I visited the Stokes State Forest a New Jersey state park in Sandyston, Montague, and Frankford in Sussex County. My friends Chris and Walt were separately camped out near Sandyston, so I called them and organised a photo hike. It was initially five of us, but two others dropped out the day before. The report called for sporadic but heavy rain all weekend, and after briefly introducing Walt and Chris, we proceeded into the forest.

While we photographing one of the smaller waterfalls we got caught out in the middle of a torrential downpour with our cameras, tripods and camera bag. We packed up our gear and rushed as quickly as we could to get back to the cars. However, we had hiked quite a distance and we were drenched by the time we made it back to the vehicles. A little while after the rain stopped, we exited the cars and Walt discovered that his Nikon D800 was displaying errors. He removed and replaced the battery but something was clearly wrong. We waited with our friend and about 30 minutes later his camera started working again.

We then drove to another section of the park in search of waterfalls. 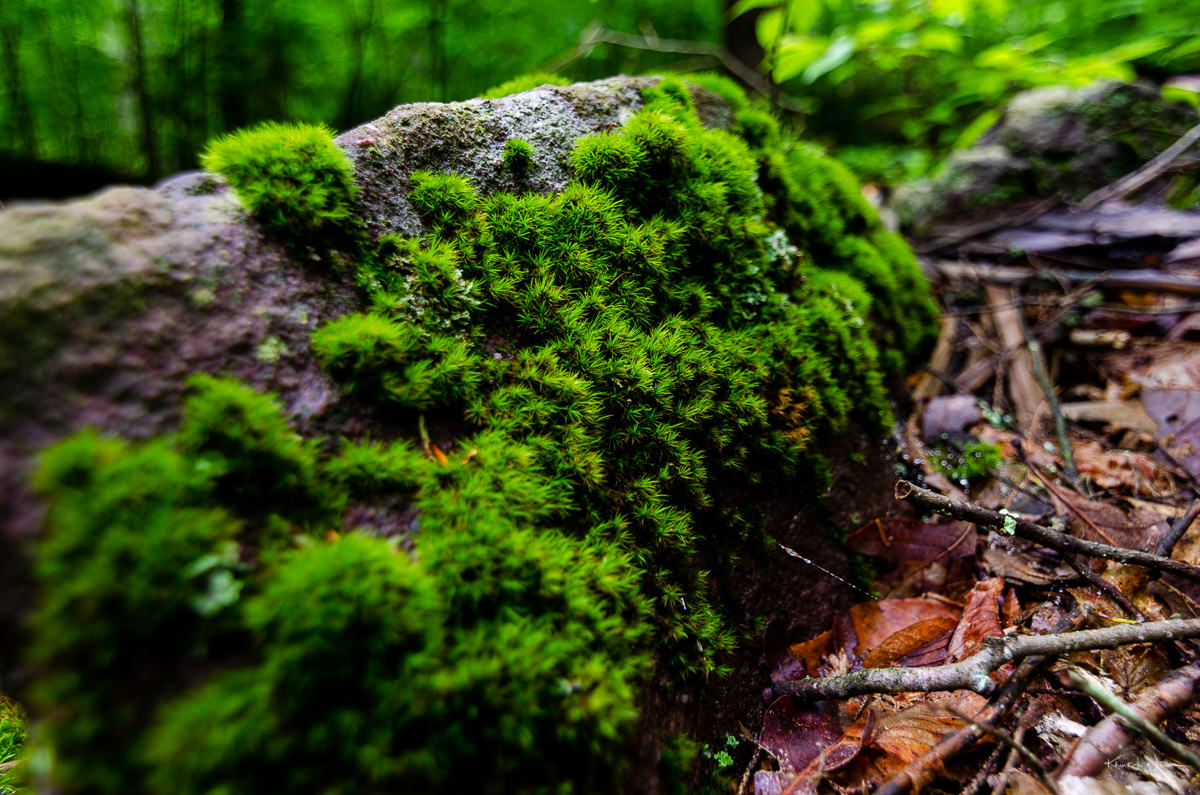 The forest is impressive. I have never seen so much green. The sweet dampness of the air added to the overall experience. I felt like a kid in a candy store; green trees were everywhere. Oaks, hickories, maples, as well as birch, chestnuts, beech, sycamore, cherry, walnut, ash, elm, and other hardwood tree species. I am allergic to most if not all of those trees, but because of the rain, I had nothing to worry about. Moss and lichen grow for about a foot up from the base of almost every tree I saw. 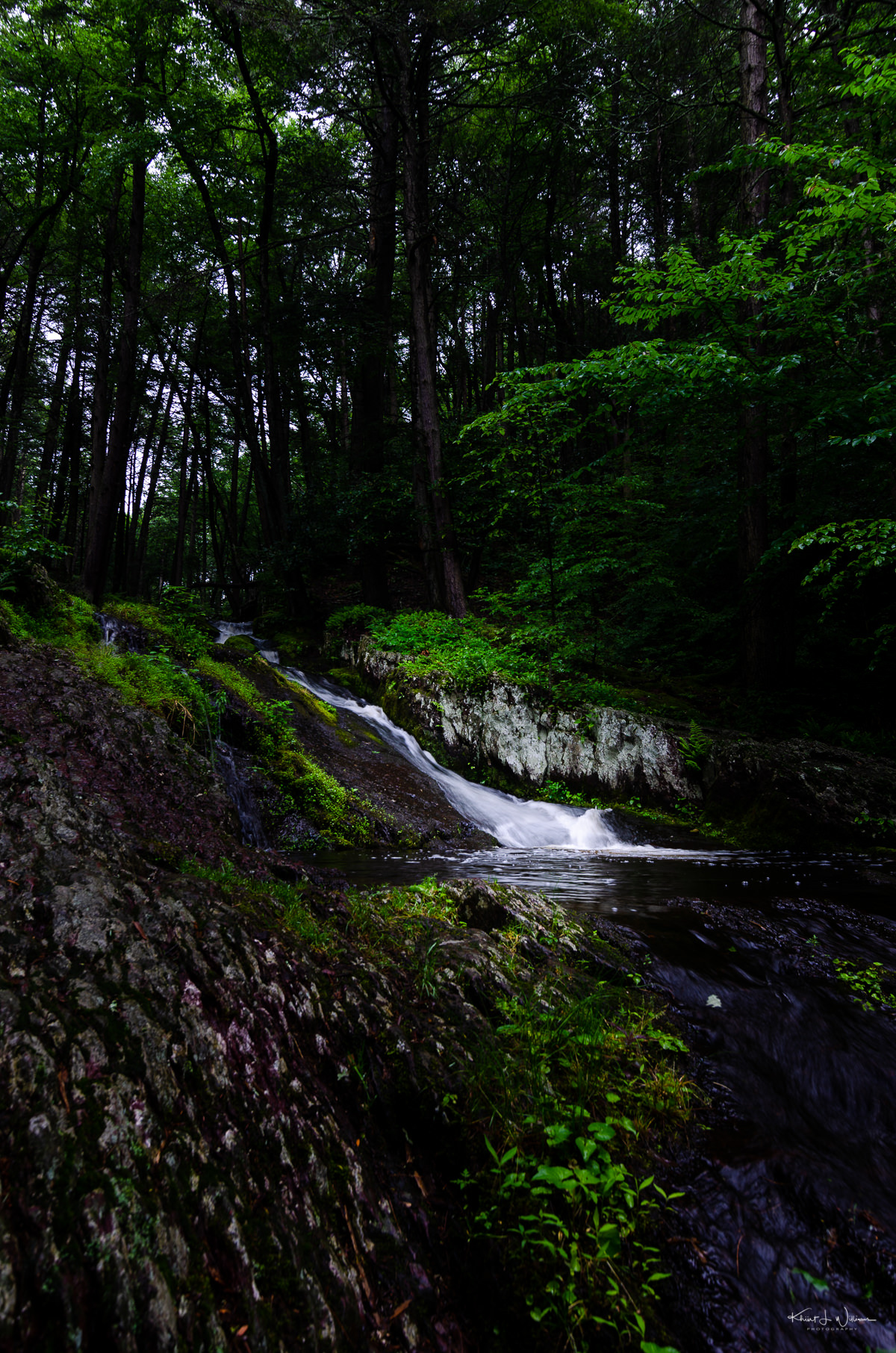 We were in search of waterfalls, so we hiked up through the Tilman Ravine Trail, not a long-distance but the trail had alternating peaks and troughs. Once we found the waterfal, there were so many possibilities that I couldn't decide where to set up. I stood there taking it all in trying to decide on the best composition.

I think places like these are places I need to visit more than once. There is so much one can do. With the threat of rain and very slippery rocks, I picked a spot and started shooting.

After hiking around Tillman Ravine, with the risk of another downpour clouding our decisions, we decided to drive to Buttermilk Falls. It was a very bumpy ride in the car. The road was full of potholes. I took some shots at the base while my friend's daughter climbed around. The change in light between the bottom and the top of the waterfall made this a challenging exposure for me. There was a lot of patient re-shooting and Adobe Lightroom work to get this one image. 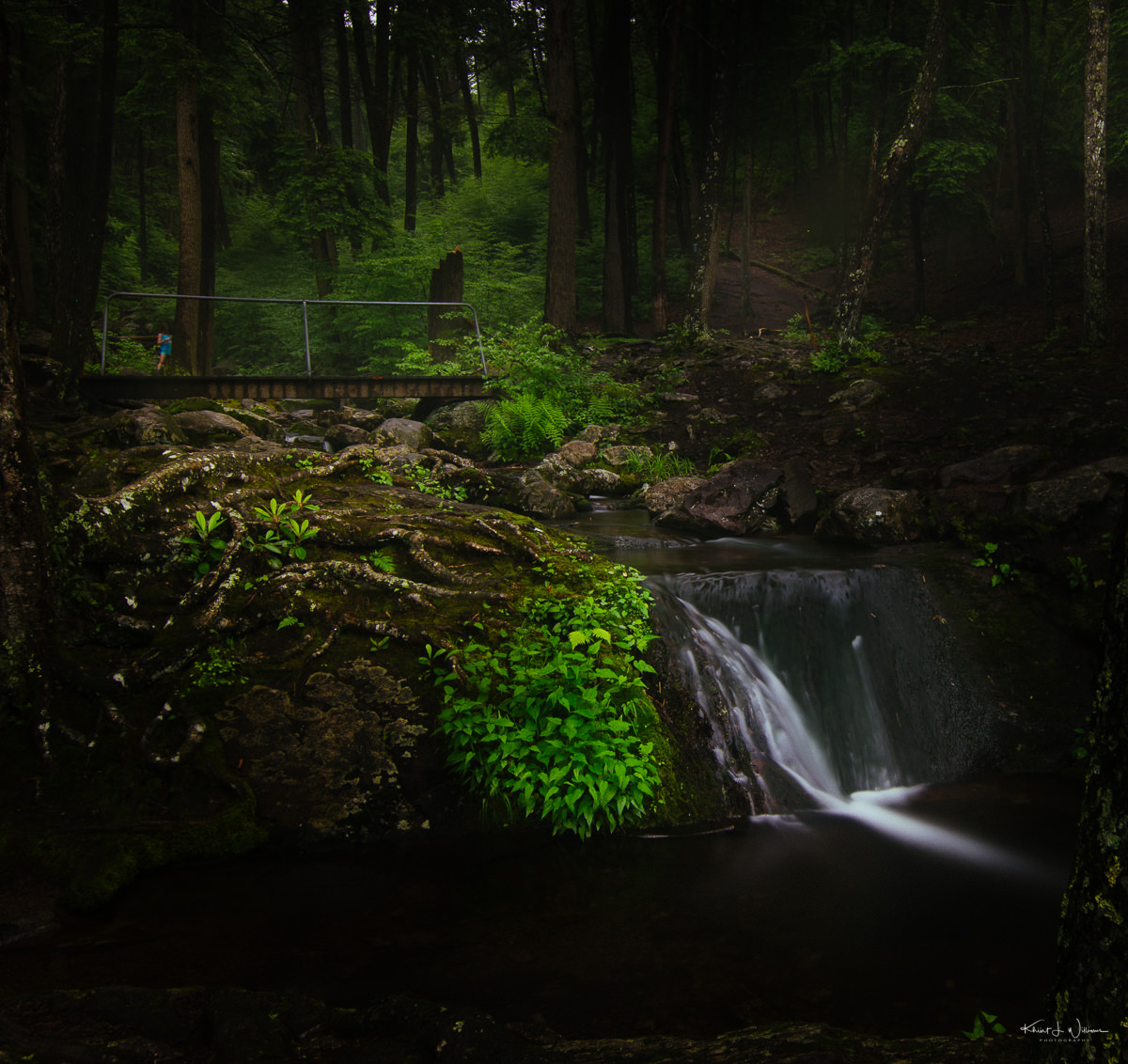 Finally, we climbed the very steep stairs to the top of Buttermilk Falls. I at once realised how out of shape I am. And it didn't help that I was carrying a tripod and a camera bag full of gear and water.

I didn't get as many images as I wanted and since I was working with a new lens, a Tokina 11-16mm f/2.8 AT-X Pro DX-II for Nikon DX, my setup and composition for each shot took longer than I expected. Plus hiking to each spot took some time. But I had fun, and now I know what it's like to hike through a forest during a torrential downpour carrying tripods and camera bags. 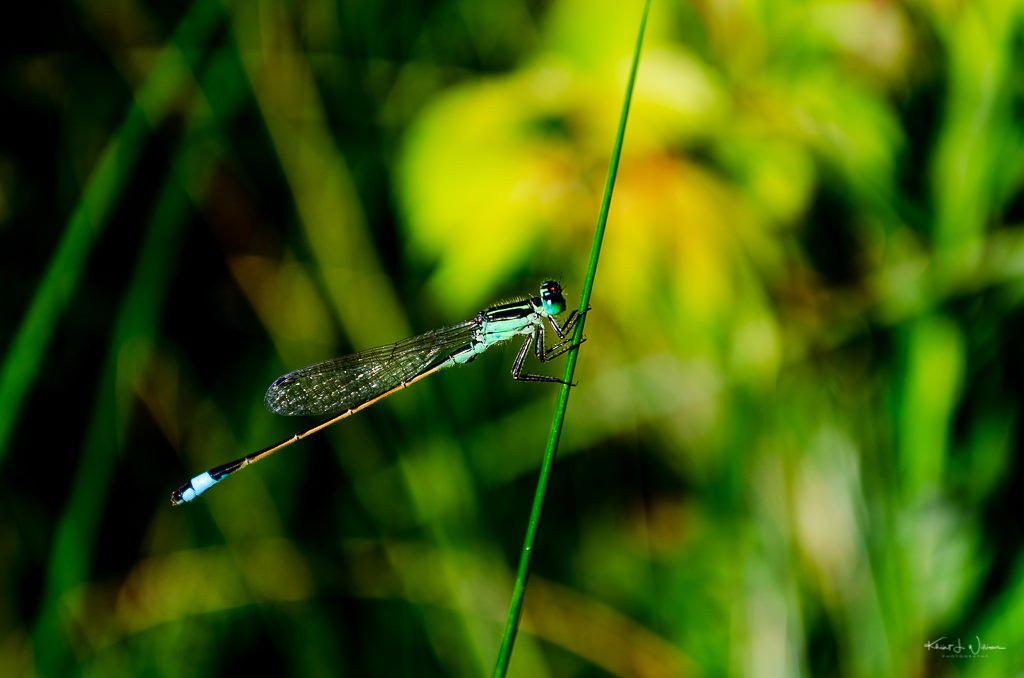 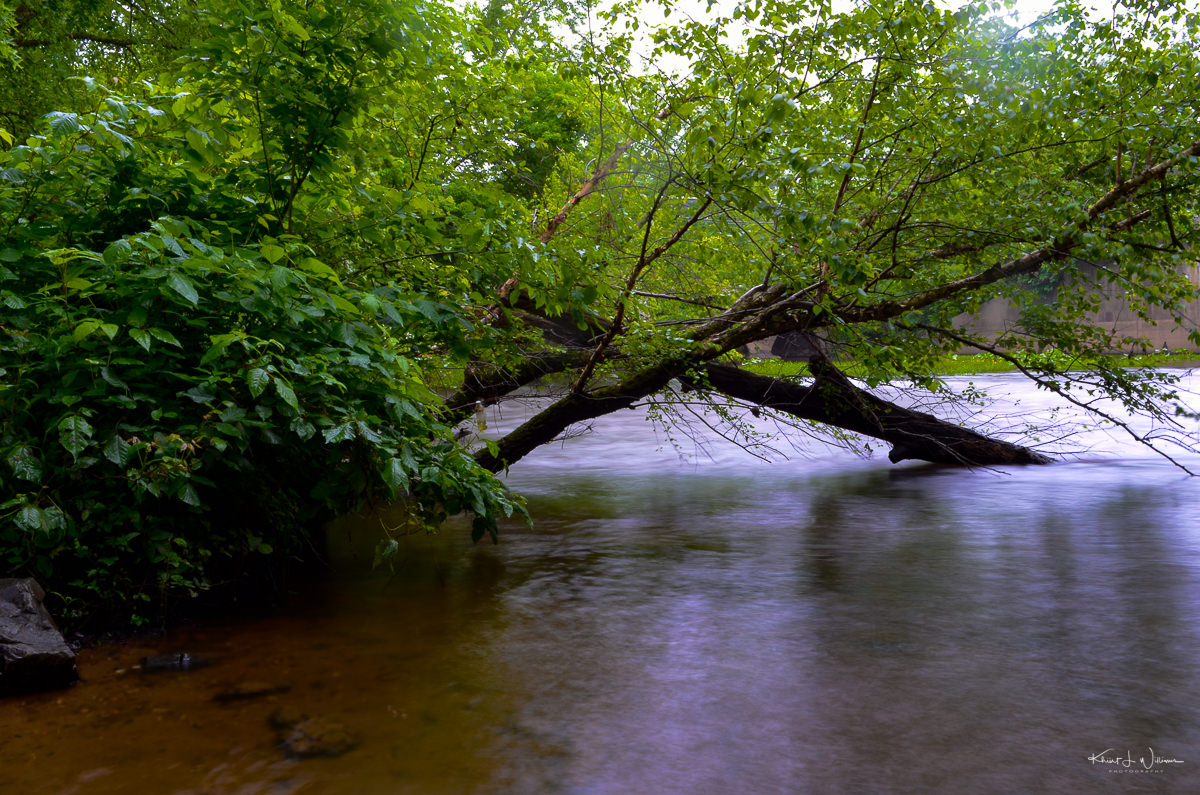 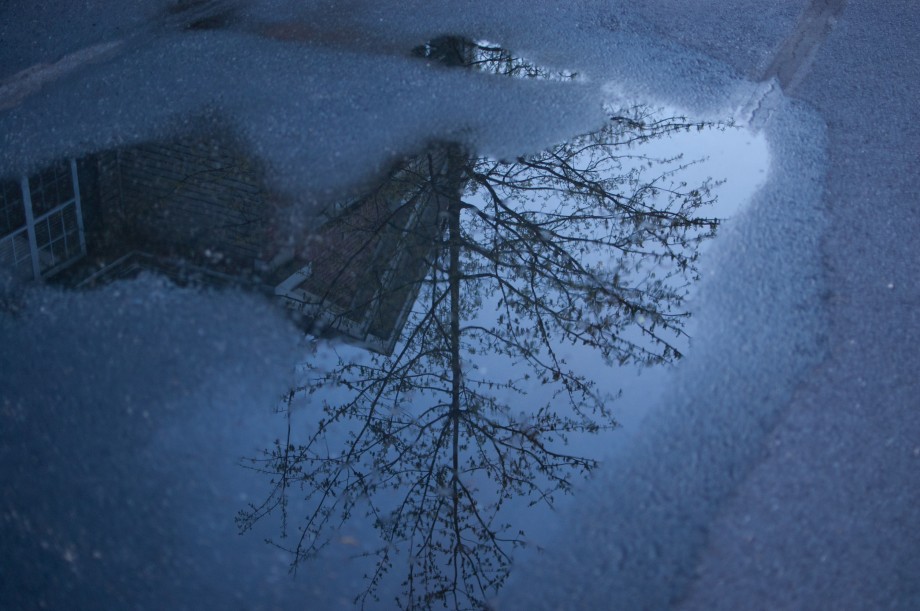