I'm a tech news junkie.  I want to know what's going all the time.  One of the first apps I installed on my iPad was NetNewsWire.  That is my favourite RSS reader for my Mac and it made sense to use it on the iPad.  NetNewsWire syncs my feeds across multiple computers via Google Reader.  I can read my news via a browser while at work (my employer standardized on Windows and Internet Explorer) and then continue where I left off when I come back home to use NetNewsWire on my Mac.  With NetNewsWire for Mac, I can also save pages for later via Instapaper, delicious.com, or by flagging or clipping them. It also integrates nicely with MarsEdit, my blog editor.

However, the iPad version of NetNewsWire felt lacking. Yes, it syncs with Google Reader but it took a long time to sync feeds and the sync often failed. Twitter and Instapaper integration was basic and in general NetNewsWire was well ... just not sexy. I also tried NewsRack but I felt that it was similar in design and operation to NetNewsWire. The app store was buzzing about Pulse, a news reader that Steve Jobs mention during WWDC. Pulse turns your RSS feed into is visually pleasing magazine style application. It is a joy to use but its 20 feed restriction severely limits its utility to me. Good thing Reeder for iPad (and iPhone) came along.

Reeder for iPad describes itself as a Google Reader Client. Yeah, it does that. Well. Reeder syncs with Google Reader meeting my first criteria for a news reader. It has social sharing options (Twitter, Instapaper, Delicious, Mail, Google Reader Share) meeting my other requirement. The people I follow on Twitter post a lot of interesting links via Twitter links that I might now have found otherwise, and I feel the need to share and do the same for my followers.

When I launched Reeder for the first time I was prompted for my Google Reader account information. Once entered, Reeder synced all my feeds to my iPad. I can customize the amount of syncing via the iPad Setting tab. There are a lot of options. I can sync just a few days of unread items or all. There are several other sync interval choices with similar settings for starred and shared items. If you bought the 3G version of the iPad, you may be limited by the amount of data consumed via the data plan. If you are a heavy user, pulling down lots of images via Reeder can quickly exhaust your data allowance. Reeder has options to help with this. I can specify whether images are cached and that this happens via Wi-Fi only.

While feeds images and text are downloaded and synced locally, clicking on the article header will launch an in-app browser to pull up the full website. This is not cached. 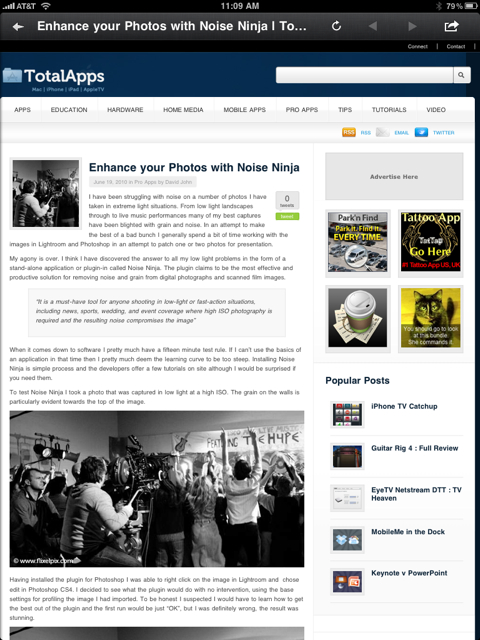 Reeder has a few social sharing and bookmarking options including Twitter, Delicious, Instapaper, Read It Later, and Pinboard. I do a lot of sharing via Twitter and Mail so this ability is an important feature for me. With Mail, I get the option of sending the article (as Reeder sees it) or just a link. I also use Instapaper to store links to articles I want to read later. You can enable or disable these options via the iPad setting tab. 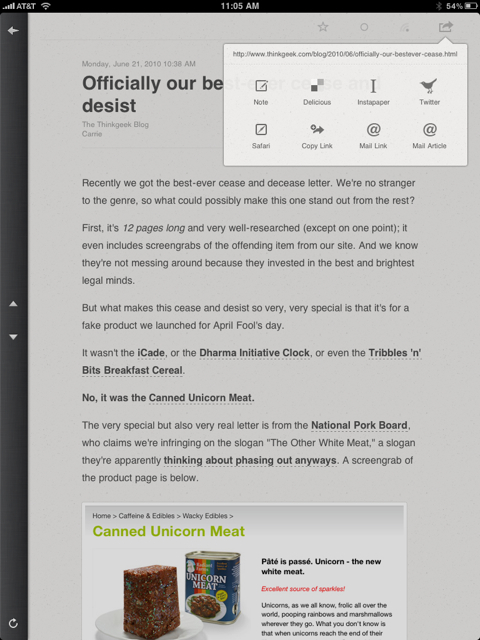 On the left side of the Reeder screen are buttons to sort feed item by starred or unread status, by date, and by feed title. There is also a button to mark all items read. 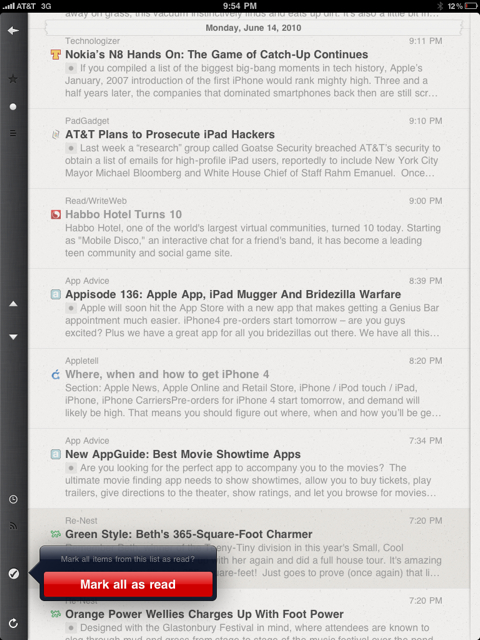 What of the other things I like about Reeder is the UI itself. The light grey text on the beige background makes things easy to read and gives the app a newspaper feel. However, it would be nice to have a way to adjust contrast or brightness for different lighting conditions. Each morning, after I get ready for work, I prepare a cup of French Press brewed coffee (usually an Ethiopian Harrar) and sit out on my front porch to read the news. Reeder is the perfect way to enjoy a cup of Joe. Reeder for iPad is $4.99 in the App Store.

4 thoughts on “Review: Reeder for iPad”