UPDATE: After completing the course, and with the wisdom of hindsight, I have realised that beverage photography is challenging and it was naive of me to expect "instantly good" results. Throughout the course, the instructor remained patient and helpful.

When taking a course, I learn best when I can "see it do it" and get direct and immediate feedback. How do I do that when the instructor and I are in separate rooms in separate towns?

I've resisted taking online photography courses because from my perspective, I could just watch a YouTube video (over and over and over again) and learn via trial and error. If the instructor can't see what I am doing wrong as I do it, how can they help me? In my opinion, they can't. The learning part is now 100% on me, just like a YouTube video.

But a few people told me "you won't know until you try it". So I'm trying it. 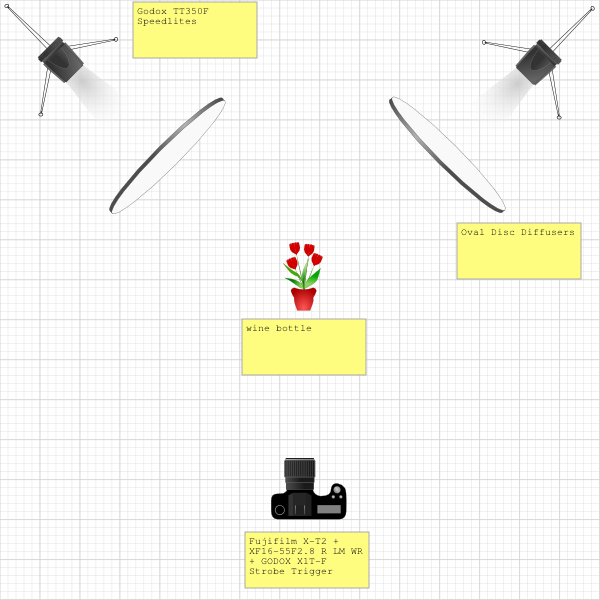 The course is conducted over three Zoom sessions across three weekends. In the first session last Sunday, the instructor showed us his studio setup, went over the basics of lighting with strobes and demonstrated how to photograph a wine bottle with wraparound lighting on the bottle and how to tweak it. After class ended, we were encouraged to take some time during the week to practice what we saw.

That was the first challenge. My questions during class were limited to what I could see via the instructor's video feed - his equipment. During class, I realised that I needed a lot more stuff so I opened a browser window to Amazon and ordered two AmazonBasics adjustable height stands and two bracket mount holders for my speedlites and an 18% grey/white balance card. They were not expensive. The total cost was about $64. They arrived Wednesday night.

I think one aspect of a remote learning photography course is that the learning effort is on the student. There is no real-time feedback loop, no fieldwork where the instructor can come over, look at what you are doing and offer some helpful tip. The instructor lectures you while you sit at your computer, drinking a beer or scotch or cocktail. That's actually one for the pro column.

I set up my equipment in my unfinished basement, trying to remember what I had seen in class. I failed. And then failed some more. I was frustrated, so I took a break. When I am trying to learn something new and making no progress, and I don't know why I get frustrated. I emailed the instructor about the results of some of my initial attempts. I included a photograph of my studio. He provided some suggestions on what I might be doing wrong. Still, again, without him and I being in the same room, with no immediate feedback loop I don't know if I understood.

I was in my "studio" for two hours before I threw up my hands. I think I need some sort of clip to hold the light diffusers in place. I also need a way to turn off the basement lights. The light switch is over by the basement steps, and in the dark, I dropped the flashlight onto my foot. It was now 9:30 PM. I wanted a shower and some time to wind down.

Unless it's learning editing techniques, I think this is the last remote learning photography course I will take. I see little value in this. I have two more sessions in this course. I expect to just watch quietly while drinking beer. Then later I'll practice while watching these YouTube videos. I might learn something.

I know this post was very negative. But I don't know how to get value from this course. What are your thoughts?