I don't need the iPad 3G

I just got off the phone from speaking with an AT& T customer service representative. We talked for almost 45 minutes about my current data plans on my iPhone 4 and my iPad. Currently, I have an unlimited plan on my iPad. When I first got my iPad, I exhausted the $15/month 250MB data plan in just one weekend. Ever since that time, I've maintained the $30/month unlimited data plan. I was concerned because I use my iPad more often and differently than I use my iPhone. I use my iPad mostly for reading news (RSS feeds and dedicated apps like the BBC ) and work — email and calendar. Occasionally, I'll watch a Netflix movie while sitting in bed. However, my iPhone is used mostly for communication, although not necessarily voice. I use several social media apps — Twitter, Foursquare, Instagram — and quite several photographies, choosing to instantly upload and share my images. I very much expected that my iPad data usage would be higher than my iPhone 4 data usage. It appears that it might be the other way around.

Just before the iPhone 4 was released AT& T changed the nature of their cellular data plans. The Unlimited plans were unavailable for new customers — existing customers got to keep it — but AT& T now offered a $15/month 250MB plan and a $25/month 2GB plan. When we got out iPhones, I signed my wife up for the 250MB plan, and I got the 2GB plan. I assumed that between Twitter, Foursquare check-ins, and photo uploads — I have several camera apps — that I would need the bigger plan. Analyzing our current usage over the last 9 months, it appears I was correct. My wife averages about 100MB/month, and I average about 500 MB/month. AT& T's provides excellent tools for analyzing iPhone data and voice usage. I am closer to maximizing my iPhone data plan than my wife, but neither one of us is going over. AT& T does not provide a tool for analyzing the iPad data usage. Perhaps that's on purpose or maybe just an oversight. In any case, I downloaded an app called My Data Usage Pro to analyze my iPad data use over time. I've been only using the app for a few weeks, so the data is not conclusive, but I believe that I am not fully utilizing the Unlimited plan as I assumed I would. Most of my data usage appears to be over Wi-Fi. I have Wi-Fi at work, at home, at cafés, around the Princeton University campus or via Comcast/Xfinity hotspots around town. In fact, from my desk at the office, I can pick up the Xfinity hotspot quite clearly. So far this month, I've used just over 500MB of Wi-Fi and less than 5MB via cellular 3G.

When Apple introduced the Verizon iPhone earlier this year, they also released an updated OS — for Verizon only at first then later for AT& T. iOS 4.3 added, among other things a Personal Hotspot feature. This feature enables the iPhone 4 to share the cellular data connection with your Mac, PC, iPad, or other Wi-Fi-capable devices. With this, the Personal Hotspot feature enabled, I would be able to share my cellular data connection with up to five devices at once. Three of those connections would be via Wi-Fi, the remainder are split between Bluetooth and USB. 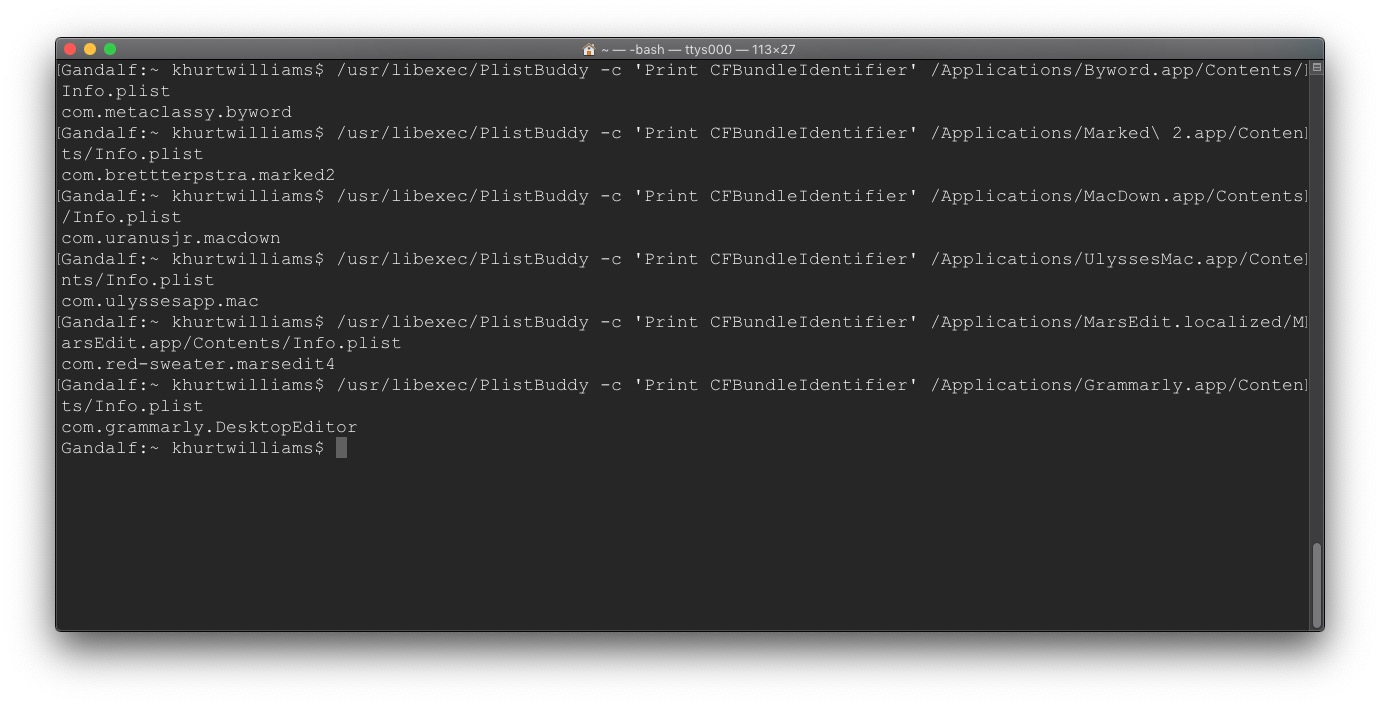 Getting the bundle identifier of an OS X application