For this month's Changing Seasons Monthly Photo Challenge I wanted to try something different. In the last two posts for the challenge, I did not set a focus. I would take photos during the month, of various random subjects and usually on the weekend. The result was that at the end of the month, I did not have a coherent set of images to represent the month. I want to try something different. Starting with March, I intend to add a weekly entry of events that transpired over the week. I may or may not have a photograph to include for that week. However, I hope that I can capture my feelings about the month as it unfolds. I don't want to get to the end of the month and try to recall what my thoughts and feeling were weeks prior. I also intend to focus on a specific subject.

I think for a challenge entitled, Changing Seasons Monthly Photo Challenge, I really should be shooting a series of images. I want to show a change. There is a stream nearby, the Rock Brook, which I have photographed a few times in the past during different times of the year. I think it will be interesting to observe how the Rock Brook and the surrounding landscape, changes throughout the year. However, I also started a personal photography project for 2017. I am photographing some of the lighthouses of New Jersey. I may use imaged from that project for the Changing Seasons Monthly Photo Challenge. 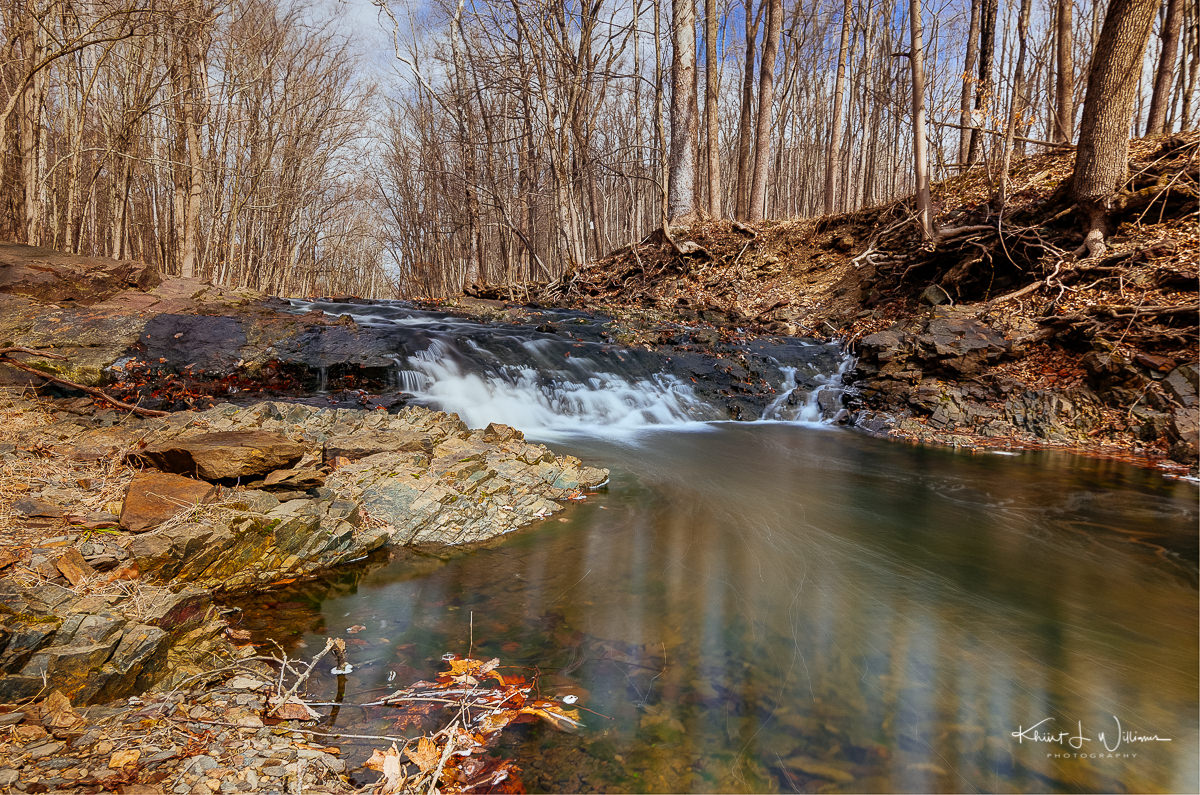 I have lived in Skillman, Montgomery Township for almost sixteen years. That's the longest I have lived in any one place and almost as long as the amount of time I lived in the British West Indies. I love my township. There are many parks and streams and the rolling hills remind of the rolling hills of St. Vincent1. One of my favourite spots in the section of the Rock Brook, along Hollow Road, just north of Camp Meeting. There is a small patch of dirt on the northbound side of the road just large enough to park a vehicle. 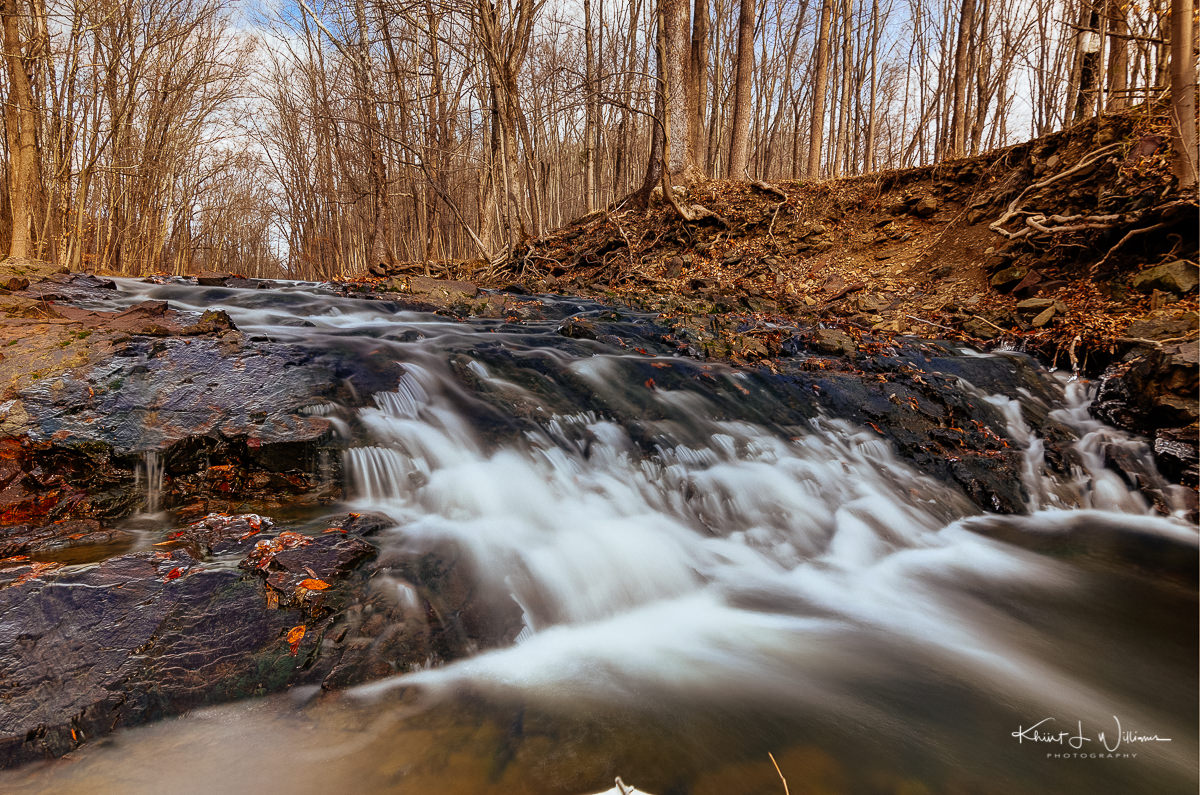 The Rock Brook is just below, after walking a short distance through the trees. As the name suggests, this brook is mostly filled with rock. This section of Montgomery Township, a small area at the foot of the Sourland Mountain Range, is unique in geology, history. The Rock Brook is prone to flooding and heavy stormwater flow and is part of lands preserved by the Montgomery Friends of Open Space. 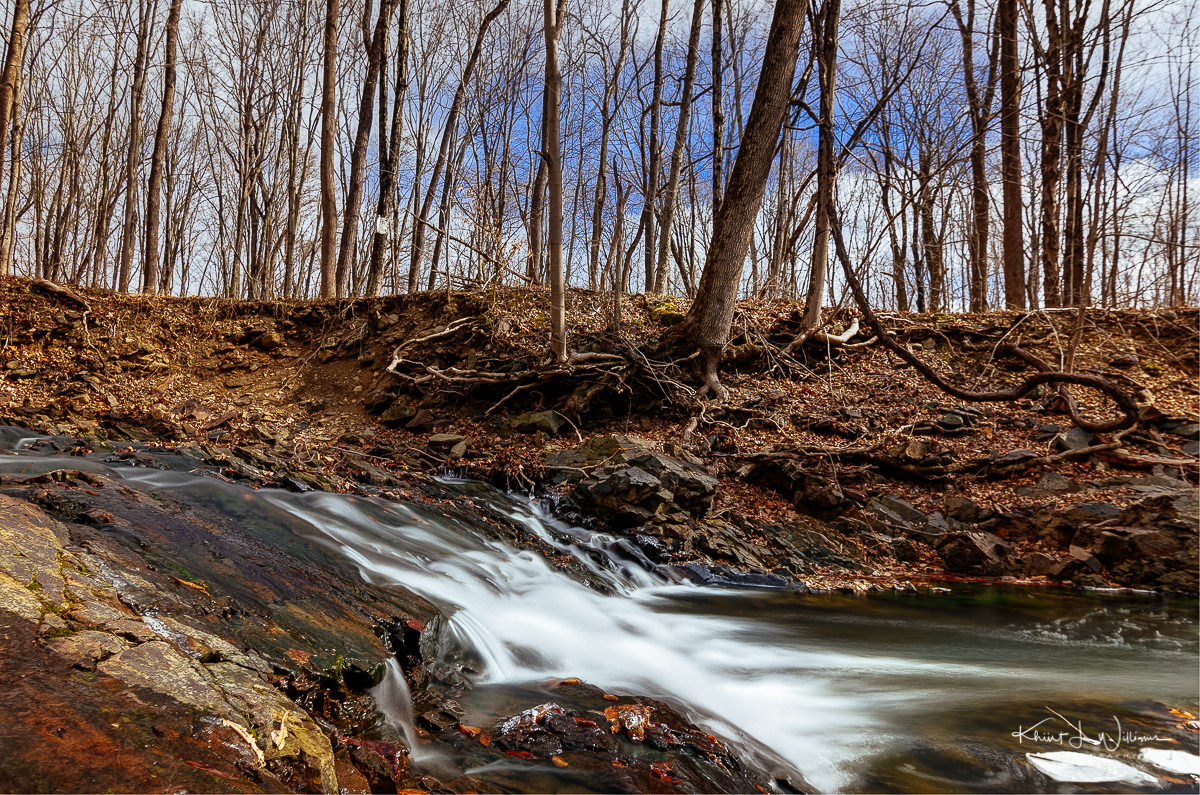 I visited the Rock Brook today. It was cold outside, about -4ºC (~ 25ºF), and windy. I wore several layers and my photography gloves, but I still felt cold.

It snowed yesterday. I am not sure for how long or how much snow. The office building where I work had very few windows and my office is located near an interior wall. I didn't see the effect of the snowstorm until the end of the day. I would guess that the area had about three inches of snow on the ground. The parking lot had no snow, but the cars were all covered with powder. 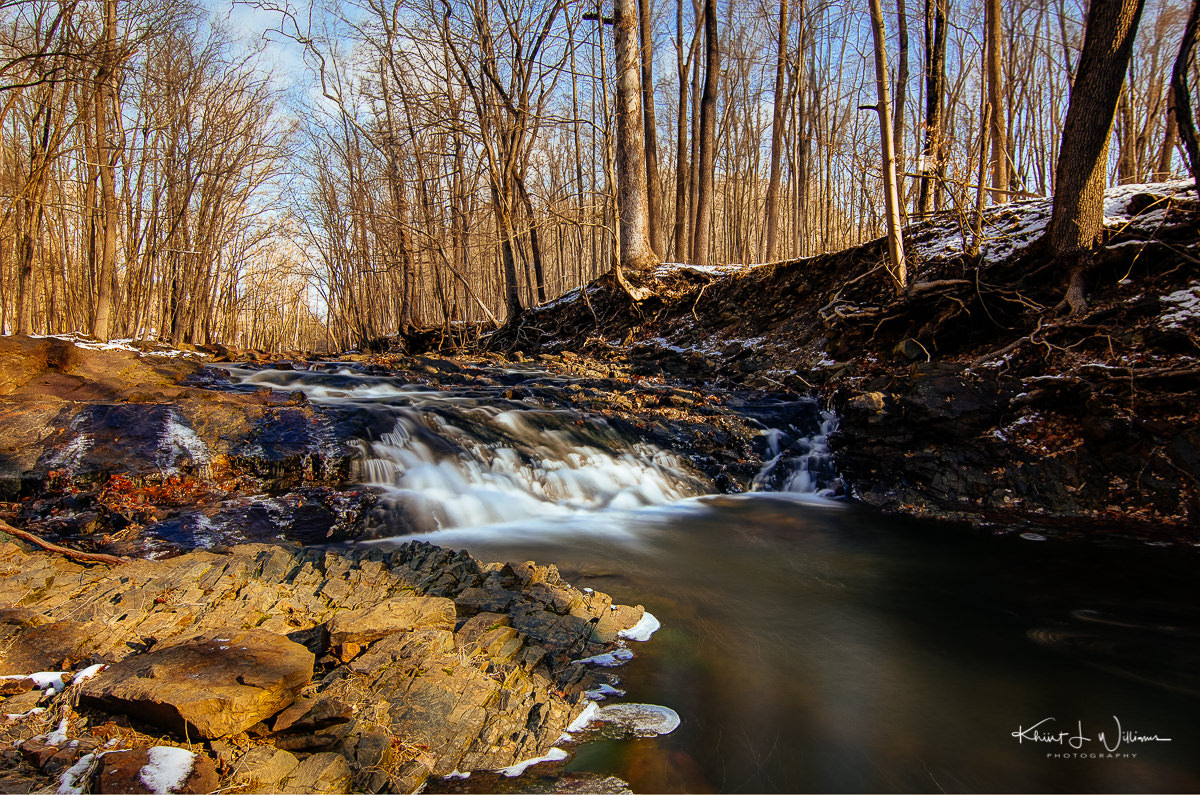 Saturday morning, after breakfast, I decided to revisit Rock Brook. Looking outside my window, I could see that the grass was still covered with snow and I hoped that I might get some unique images of the brook. I drove over to the spot on Hollow Road and parked just above the Rock Brook.

As I grabbed my camera, I looked down through the leafless trees to the water. There was just enough snow on the rocks, and some parts of the brook were frozen over. The sun poked through the tree line providing both shadow and light across the water. I walked through the trees, mentally planning my shots. The frozen snow crunched under my boots. It was cold, and there was a slight breeze. 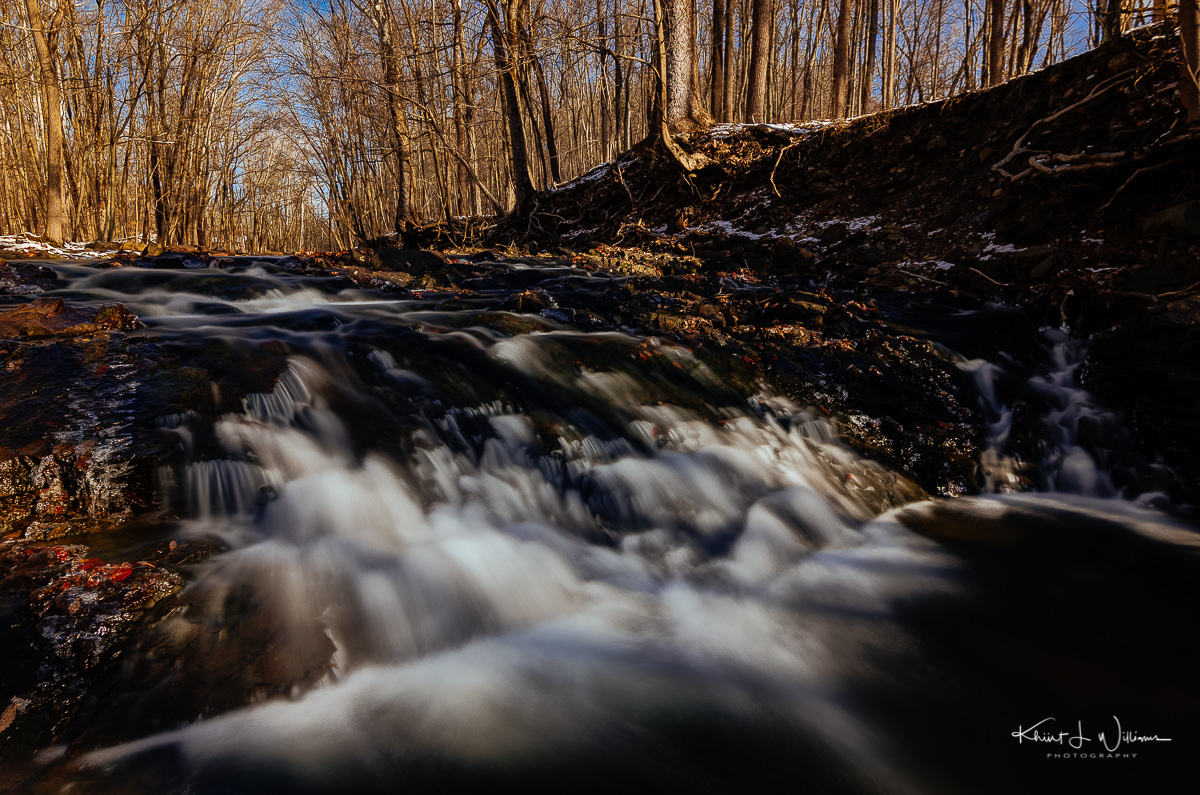 I did my best to capture and frame the images from the same spot as the previous week. However, it was hard for me to remember the exact places and the snow cover made it even more challenging. You can see that the framing was not quite the same.

I tried to move quickly; setting up my tripod, getting the exposure readings from the camera, calculating the shutter speed for the ND filter, attaching the ND filter, and shooting three images.

It was about -6ºC outside. I wore three layers of clothing, and although my feet were comfortable, operating the camera meant exposing the area of the glove covering my thumb and pointer finger. I tried to minimise the exposure to the cold and stayed out as long as my fingers could handle things. That was about thirty minutes. 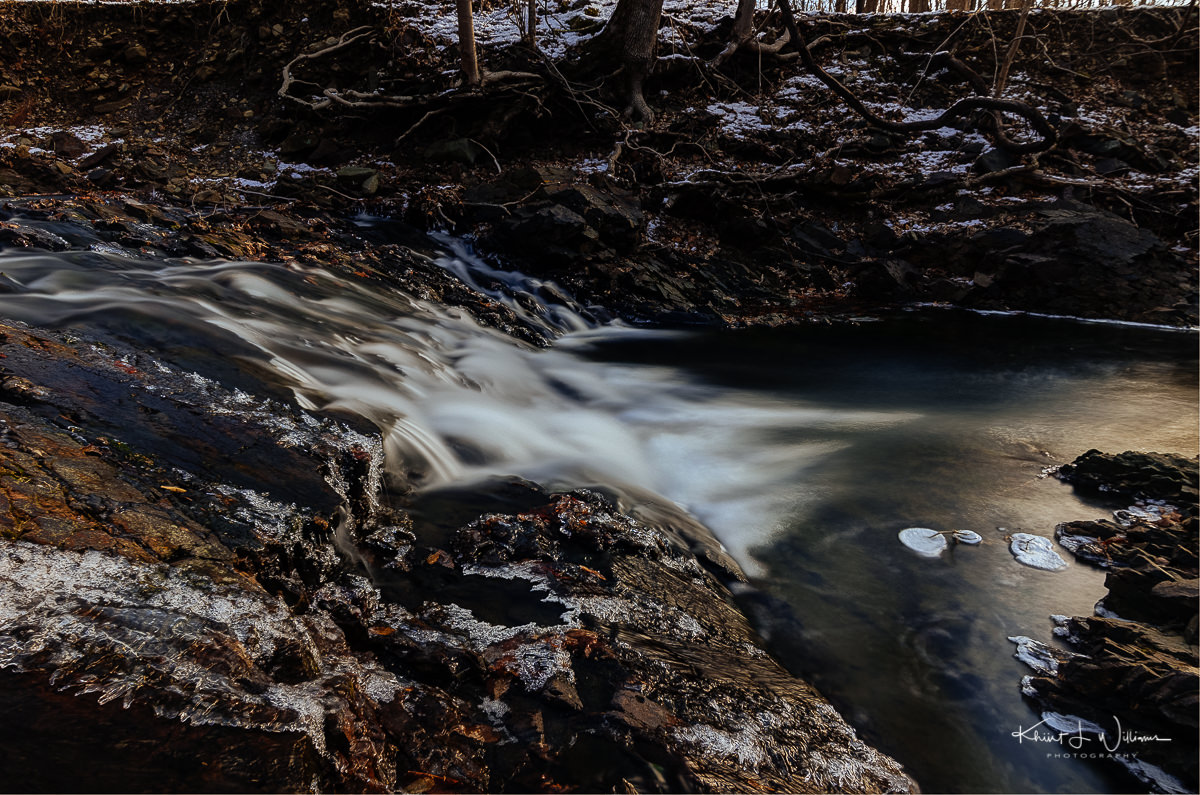 I liked all the images I captured, so here's the gallery. 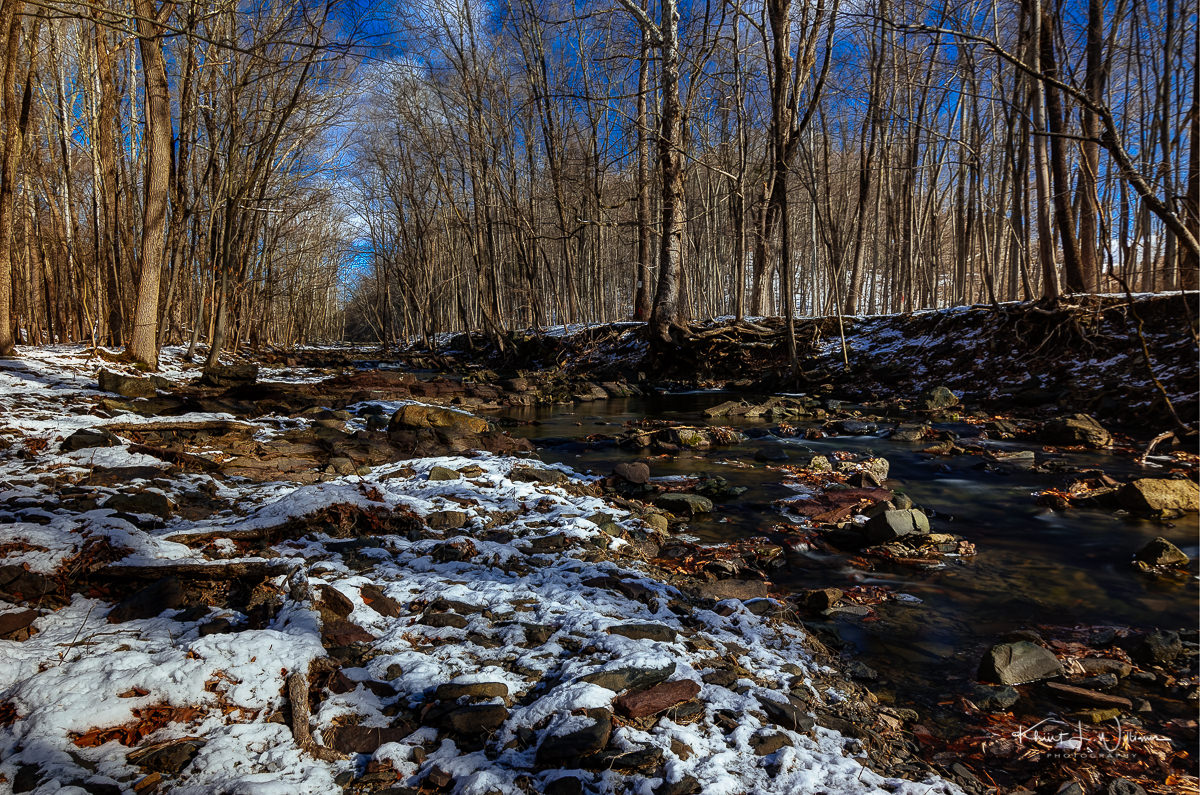 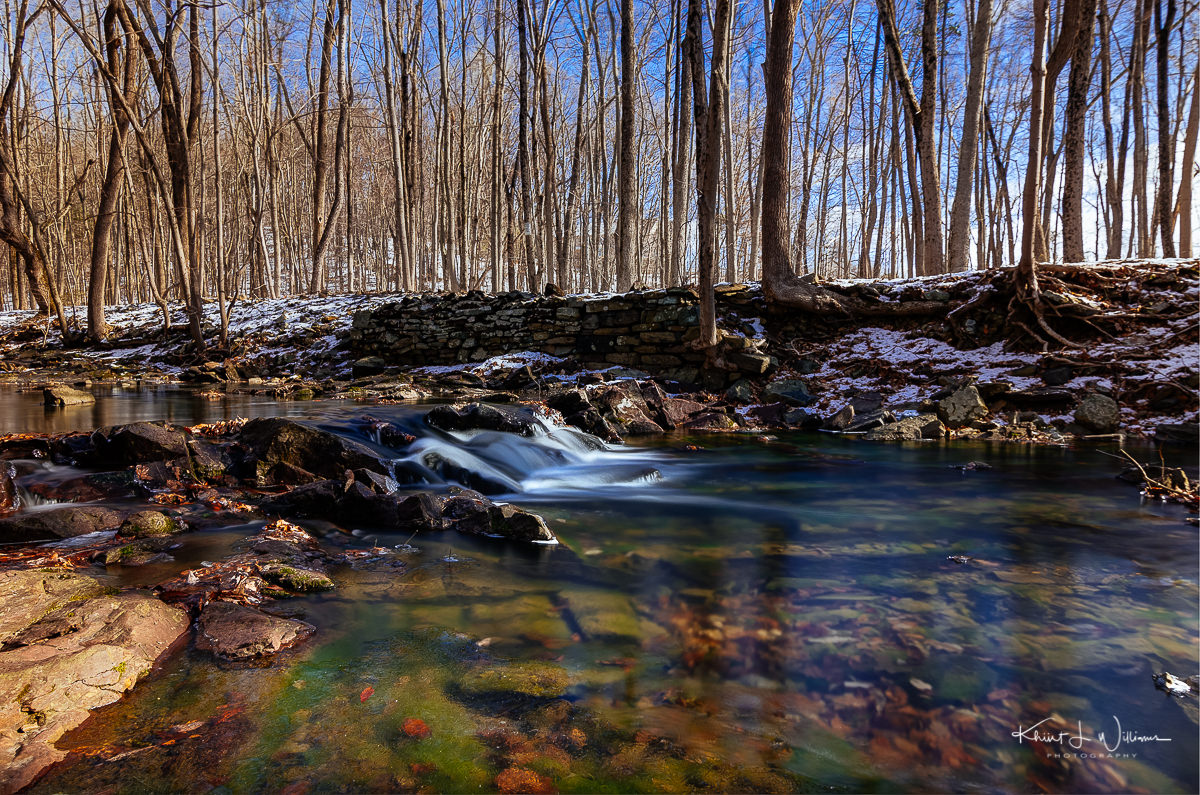 I didn't go to the Rock Brook today. This weekend I completed a group photography workshop where I was challenged by being forced into a photographic box -- time limits and focal length limits. By the end of the workshop, my approach to photography was transformed. While walking around completing the challenges that our instructor had assigned the group, I started thinking about my approach to the Changing Seasons Challenge.

What if I didn’t return to the Rock Brook? What if I slowed down, spent some time thinking about I wanted to say with my images, and focused on the story I wanted to tell about March?

Besides the Tuesday Photo Challenge, I am participating in a monthly photo challenge called Changing Seasons. It was almost the end of March, and I wanted to capture some photos that portrayed Princeton University in March. There are a few iconic — aka, heavily photographed — images of the university. The Firestone Library is one of them. So is East Pyne, Nassau Hall, and the Princeton University Chapel.

Why black and white? It was a sunny day, but I wanted to convey a sense of "historic". Honestly, I don’t think I accomplished telling the story about Princeton University. Something is lacking. What do you think?

The Changing Seasons Monthly Photo Challenge is a blogging challenge by Cardinal Guzman. Each month I will post at least one photography that I think represents the month. Sometimes I’ll post a set of images.