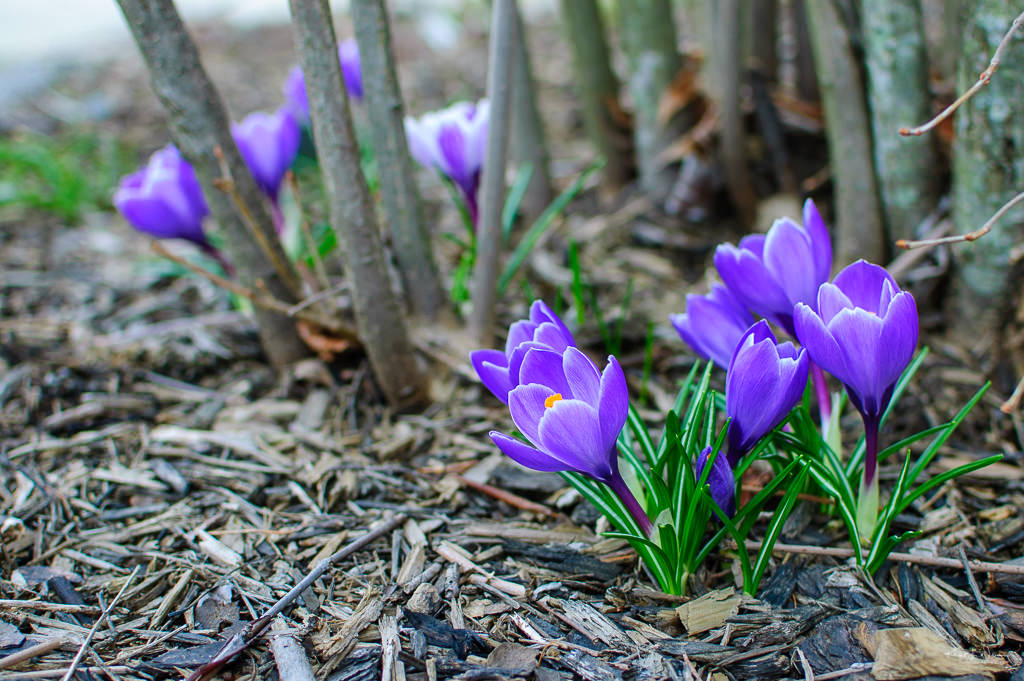 I am so frustrated now.  The weather outside is perfect for photography.  Bulbs and other small plants are poking through the soil and displaying their beautiful flowers, the temperature is around 50°F, and the sun is glowing through a mostly blue sky. But ... I'm stuck inside suffering through a persistent bout of vertigo — a side effect of fluid build up in my ear canal from my allergies. Yes, Spring is my favourite part of the year, but I'm allergic to it. The allergies (but hopefully not vertigo) will last into the end of May, worsening in April as everything begins to pollinate at once. Sigh! 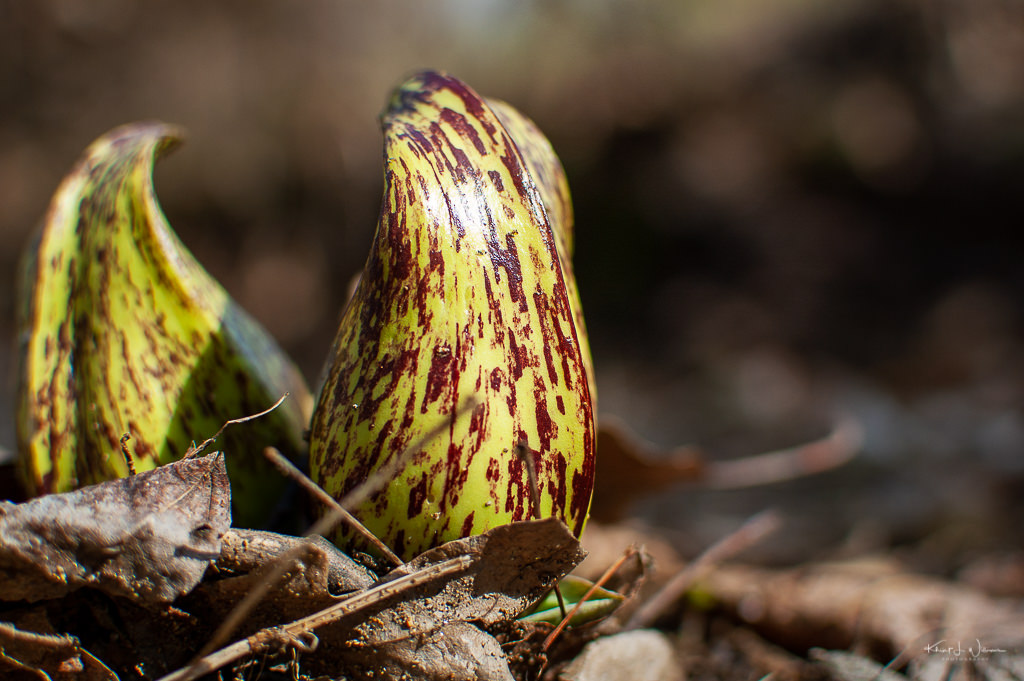 I'm home today with a bad case of vertigo. The diazepam failed me during the night, and I woke up with the ceiling spinning and a queasy stomach. I felt a little better after breakfast — and a dose of diazepam — so I decided to go out for a walk in the woods near my home. Inspired by the purple crocus that is now blooming in my garden patch, I took my D40 with attached Nikkor f/1.8 prime and went in search of exotic flora.

I was not disappointed. I found these alien-looking plants poking out from beneath the dried leaves. I had never seen anything like this before, but they reminded me of some of the tubers that grow in the tropical rainforest of the British West Indies where I grew up. I also had flashbacks of alien movies where the aliens hatch from pods that they planted on earth in preparation for their invasion. These are nothing that sinister but they do have a sinister-sounding name, Skunk cabbage. After returning home I did a quick Wikipedia search.

I am so happy I did not touch them. The weird-looking pods I photographed are the flowers of the plant. Later in the year, broad green leaves will appear.

If your art happens to make money, then it’s all gravy. But don’t try too hard to make money. That’s just plain annoying. Give everything away creative commons non commercial, and hardcore fans and other businesses will find a way to reward you. ~ via Trey Ratcliff

I found this quote by Trey Radcliff via Jorge Quinteros' photoblog. When I first started putting my photographs online I was concerned that other people would steal and use my photo. I started off on Flickr with the most restrictive license. But something was bothering me by the whole licensing thing. It just didn't seem right that I was locking my art, as bad as it was, behind a license. I felt that if my photos could bring joy or be useful to others I wanted them to be able to use them in other creative ways. So, I made the decision to release all my non-people images ( I don't often have people sign releases ) under the Creative Commons Attribution license. If someone wants to use my photos in a news article or blog post. Go right ahead. If you want do download and frame it and hang it on the wall of your home or place of business. Go right ahead. I'm not in the business of selling photography but if someone wants to buy a print. They can. But if you decide to use my photo in some other way just make sure to let everyone know who took that photo.