The weather this week been uncharacteristically warm for February. The air temperature has ranged between 8°C and 22°C. Normally we would expect cold, windy and wet weather. It feels more like late Spring than late Winter.

I was ill all last week; since last Sunday. Normally I am not sick this time of year. I have a fairly strong immune system. I also usually get a flu shot. This year I just didn’t take the time. I think my system was overwhelmed by exposure to sick people. My wife’s best friend had returned from India and debarked the plane with the flu and my wife had gone over to bring her some food. The next day my wife was sick and two days later when her symptoms worsened, I took her to urgent care. I think everyone in the waiting room was sick.

All this week I’ve stood at the window looking out at the incredible weather. I was upset that I could not enjoy it. I wanted to got out into the Sourland Mountain for a hike in the woods. I wanted to feel the sunlight on my face. I wanted to hear the sounds of nature. I had been listening to the whir and whoosh of the central heating and cooling system all week. I hate that sound.

Yesterday I opened the sliding door, grabbed my camera, and sat outside on the steps at the back of our home. I sat there enjoying the almost quiet. In the distance, I could hear the leaf blowers. Short gusts of wind caressed the tops of the trees. The aches and pains in my back were uncomfortable. I lay back and watched the winds higher up push the clouds through the sky.

The bird appeared and hopped from branch to branch above the bird feeder. I sat up and followed its travel for a bit. Then I remembered I had the camera. I fired off a few bursts of the shutter. The bird hopped to another branch. Then another. Each time, I captured a burst of images. It seemed to be confirming that I was not a threat. I grabbed a few more shots and then I stopped. I watched the bird eat. Having had its fill, the bird then flew off. 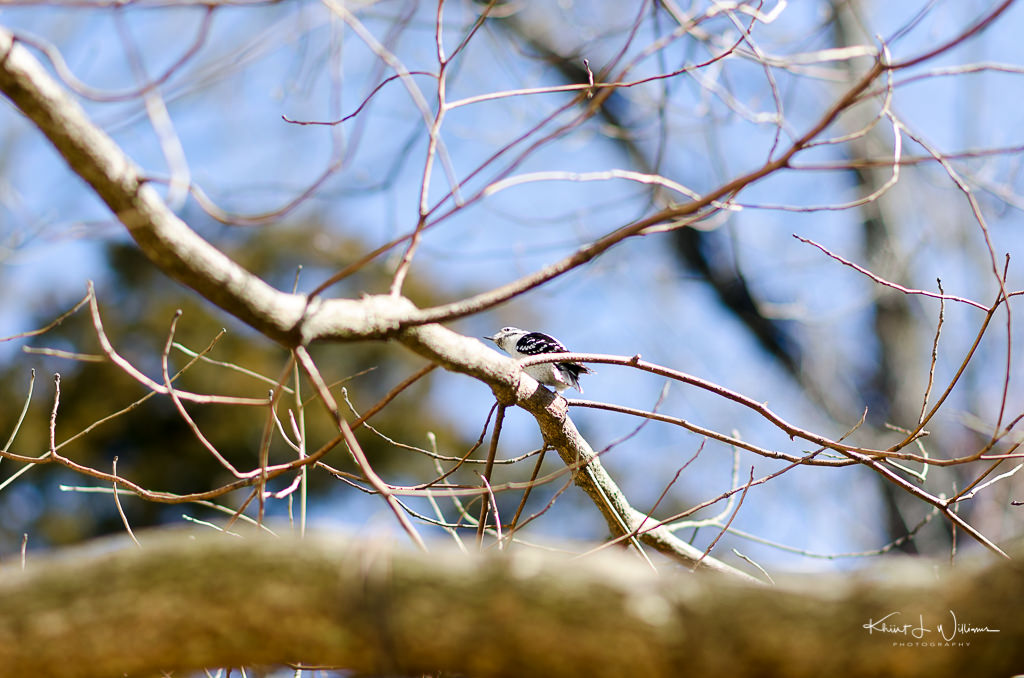 I have no what type of bird this is. Do you?

UPDATE: According to my Instagram contacts, this is a downy woodpecker.