We've lived in New Jersey for several years, but I've never liked the Jersey Shore. It's just not comparable to the West Indian islands like Antigua and Bequia where I grew up. The brown polluted looking waters of the Jersey shore are no comparison to the turquoise blue waters of the Caribbean Sea. That's my reference point.

But the Jersey shore is what we have, so I have to make the best of it. But I hate noise, sleazy Las Vegas-style beaches. When I go to the beach, I want to relax. I don't think anything is relaxing about arcade machines and beach blankets and umbrellas stacked so close to each other that I can smell the sweat dripping off the other beach visitors. Yuck!!!

Thank goodness for Long Beach Island (LBI). We booked a bread and breakfast in Barnegat Light for one night — I would have booked more nights if I had known how beautiful the place was — and spent a day on an empty beach. No fracking boardwalk — again, if I wanted Vegas, I would go to Nevada, and I don't wish to Vegas.

I've always loved photos of birds in flight, and the seagulls did not disappoint. The real challenge here was the changing nature of the light as the gulls flew across the sky from east to west. I'm not sure how I pulled this off. I put the camera in aperture priority mode, letting the camera choose the exposure speed.

I took a lot of photos of the gulls. With its head tilted to one side, this one bird seems to have a curious expression on its face. Almost like he's thinking, "What's this daft bloke up to?".

Kiran and Shaan love the beach. The water was a bit cold and rough that afternoon — we did not know it at the time, but an earthquake had just rocked the eastern seaboard — so the kids had fun splashing around in the surf and chasing each other.

I don't have any photos of the sand castle, but they did build one, dragging buckets of wet sand up from the surf. We ate on the beach but had to be careful to watch out for the seagulls. One of these figured out how to open our back of goldfish and before we know it had eaten most of the bag. Shaan's not a fan of swimming. Ever since he was a toddler, he's much preferred playing in the sand. I can't say I blame him. The water was cold and brown. Kiran's favourite thing about the beach is the water. She's like a fish out of water when on the sand. Flipping and flopping around. I like to think that her love of the water comes from my and Shaan's love of the sand too. Bhavna was happy. Most likely because of none of us — myself, Shaan and Kiran — were face down on a computer. No iPhones or iPods either. I think that's bliss for her. Or ... she could just be enjoying spending quiet time with her family.

We retired to our bread and breakfast — Minerva's by the Sea is near the top end of Barnegat Light — to shower and change for dinner. A friend and coworker recommended a seafood place in Viking Village with outdoor picnic-style seating. It's fast-food seafood, but we enjoyed it.

After dinner, we went up to visit the Barnegat Lighthouse. The lighthouse has a long and storied history. There is a walkway along the rocky bayside of LBI near the lighthouse designed for visitors. Old Barney is no longer an active lighthouse and has become a tourist attraction.

We stuck around to watch the sunset over the bay. The light casts a glow that makes the skin a golden colour. Bhavna and the kids posed for me since I insisted that the light was just perfect.

My wife and son enjoyed the attention of my camera. Kiran's growing up too fast. She starts the fifth grade this year, but in a few years, my baby girl will be a baby no more. Sometimes that makes me sad.

Bhavna and the kids started goofing off, and I got some great candid shots.

The sunset was breathtaking.

After a long day at the beach, the kids were tired and did not want to stick around to see the lighthouse at night, so we retired to our room. We got a chance to meet some of the other families staying in the house. There was a couple from Hillsborough — just over the border from our township — with two girls, one of whom was Kiran's age and another couple from Ocean County with a toddler. Our room had a lock, friendly families were boarding next door, and there were a restaurant and bar,Kubel's, across the street. So ... walked over to Kubel, had a beer or two. 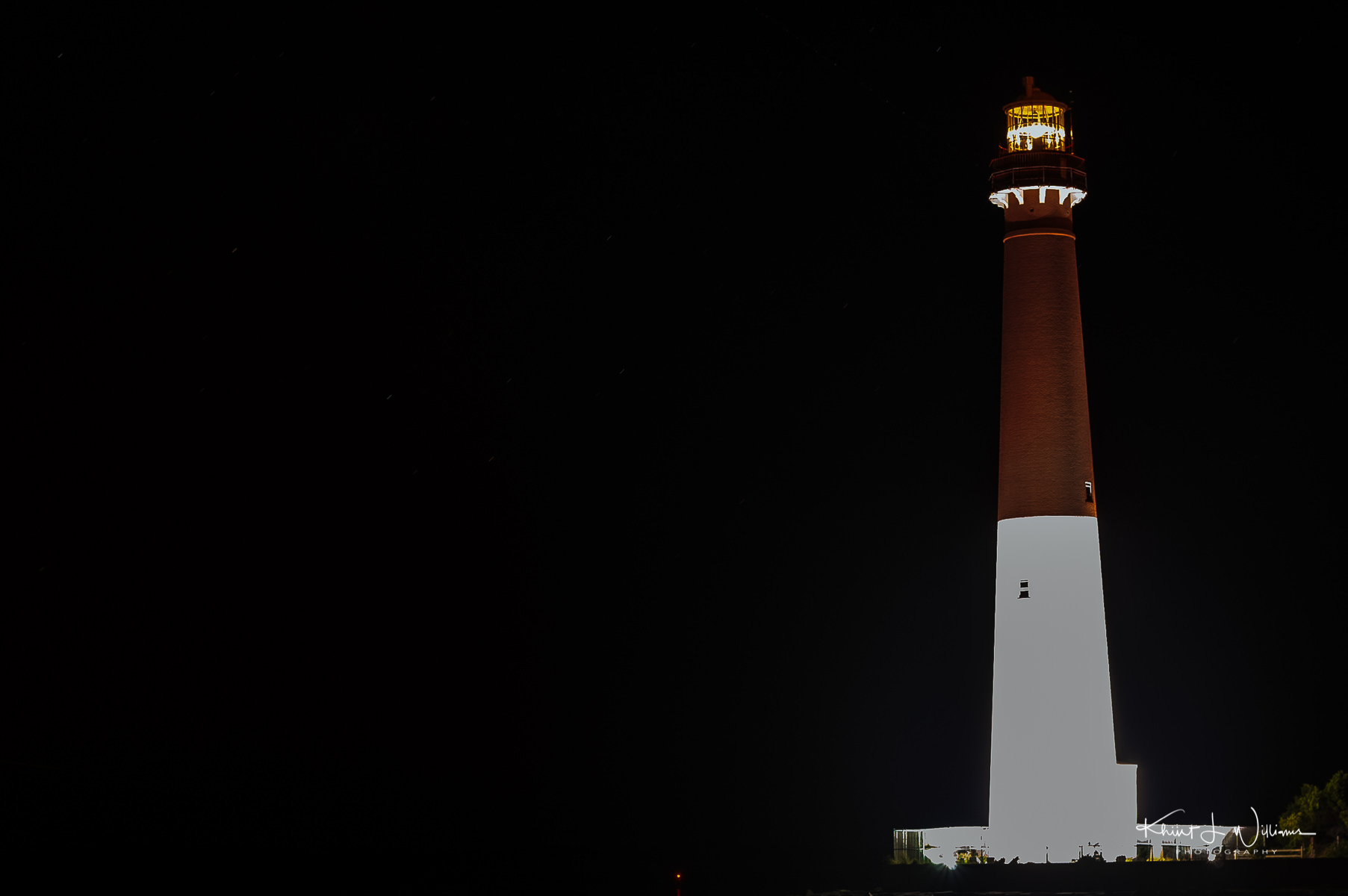 On the way back from Kubel, I noticed the lighthouse glowing up the street and could not resist. I used my tripod and got a few long exposure shots of the lighthouse.

Shaan and I are early risers. Minerva's offered breakfast at 8:30 AM, and we were up at 6:30 AM. On our exploration of Viking Village the day before we had found a coffee takeout place called How You Brewin' — part of a hyper-local chain of coffee places. I had bought a coffee mug as part of a promotion. For the cost of the mug, I was offered the opportunity to get $100 refills for the rest of my life. Perhaps they meant the life of the mug, but Shaan and I decided to try it. We were a bit early still, so we waited our time chatting.

The sunrise lighting was just magical. I regret I do not have the skills to fully realize what I saw. I've since decided that I love summer light at sunrise and sunset and prefer to take photos at those times of the day. Perhaps that's true, and maybe I'm just using that as an excuse for not making any photos for my 365 projects in over five days. Yikes!

Shaan and I noticed that some small gnat-like bugs intended to bite us, so he jumped back into the car. I used the opportunity to explore more of Viking Village. To the right of the coffee shop is this island furniture store that had colourful chairs and other items that I could easily see on a beach on an island in the Caribbean Sea. I wanted to sit and enjoy the warmth of the rising sun on my skin.

I looked to get some photos of the gulls sitting on dock posts waiting for a fisher-person to make a mistake, but ... it was not to be.

On the other side of the coffee shop is an antique store called The Seawife. The main building is a renovated school house (at one point a barn ) that has been relocated from Harvey Cedars, a lighthouse on the island. Next to it is an ornamental outhouse.

After checking out of Minerva's, we went back to Old Barney. We did not have time on the previous day to climb the lighthouse before it closed. I'm not sure how many steps we climbed, but I do know we were pretty winded by the time we got up to the lookout deck. Shaan and I are both "apprehensive" about heights, but I managed to overcome mine and ventured out to take the photos. Shaan did not.

I used some graduated filters in Adobe Photoshop Lightroom to create a tilt-shift effect.

Bhavna, the kids and I agreed that we all had a good time, and next year we want to rent a home on the beach for a week. Can't wait.

Tagged with barnegat light, Barnegat Lighthouse, Beach, Down the Shore, Jersey Shore, Lighthouse, New Jersey, New Jersey Shore, njisntboring, njshooterz, Ocean County, Photo Essay, Summer, Travel, Vacation
We use cookies on our website to give you the most relevant experience by remembering your preferences and repeat visits. By clicking “Accept”, you consent to the use of ALL the cookies. However, this website has no interest in selling your information and does not explicitly use social media cookies from Facebook, Google, etc. Read More
Do not sell my personal information.
Cookie SettingsReject AllAccept
Manage consent